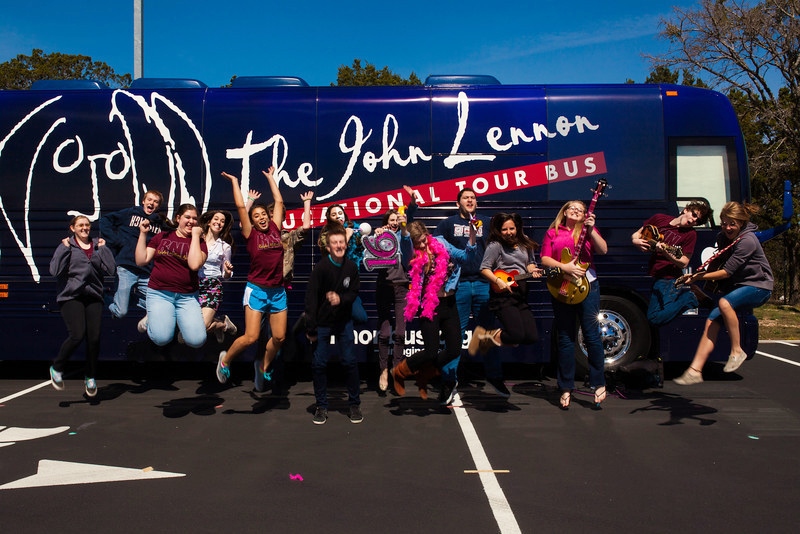 For 15 years, the nonprofit John Lennon Educational Tour Bus has helped to make dreams a reality for students of all ages across the United States and Canada with its mobile state-of-the-art audio recording and HD video production studio.

“Every year, the Lennon Bus kicks off its season equipped with all the latest and greatest HD audio and video equipment from our supporters,” said Hans Tanner, one of the three engineers on board the Bus. “This year, we were outfitted with an awesome new device — the NewTek TriCaster 850 EXTREME with the TriCaster 850 CS.”

The Bus debuted TriCaster live streaming at the vehicle’s 15th anniversary celebration in January at the 2012 NAMM (National Association of Music Merchants) Show in Anaheim, Calif.

The dream is made possible by the many partners and sponsors that believe in the mission of the Lennon Bus and with the support of Yoko Ono, John Lennon’s widow, according to Brian Rothschild, executive director of the Lennon Bus.

The on-board engineers help students write, perform, record and produce original songs and complete music videos in one day. Now with TriCaster, students also can explore broadcasting and live streaming. TriCaster 850 EXTREME can switch up to eight live HD video sources, provide discreet, ISO recording of each video source, key text and graphics over live video and compress video out for live streaming on the Web. Its many other features and options include full audio mixing, virtual set integration and full-featured character generator.

“It’s our goal to have students involved in all aspects of the production so that they can see what the workloads are, see what opportunities are out there and then experience them dur- durw - hat during their day on the bus,” according to Jeff Sobel, chief engineer for the Lennon Bus.

“There have been times when students thought they wanted to be musicians until they saw the video switcher and then realized that that was their life’s dream,” said Sobel. “They didn’t even know that was a career that was out there. It’s our mission to open their eyes to the possibilities.” 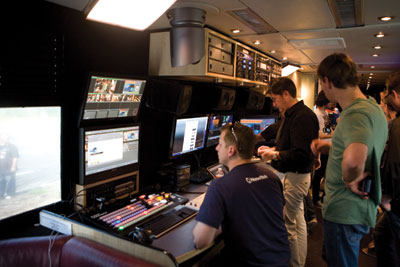 The Bus makes 200 stops traveling 10 months a year, providing free hands-on programs to students in high schools, colleges and student groups and offers a variety of free workshops and other programs at music festivals, concerts, conventions and community organizations. Students often have the opportunity to work with professional musicians, such as The Black Eyed Peas, who have recorded some of their music on the Bus.

“The Bus reaches 250,000 students a year,” Rothschild said. “It provides access to young people who never would have had the opportunity to use these instruments and digital equipment. I think the Bus has visited just about every state through the years.”

“We see the Bus as the living legacy of John Lennon and his belief in artistic expression,” Rothschild said. “The Bus continues to evolve as technology improves. Every year, we incorporate new products and new techniques.

“That’s where TriCaster comes in. It allows us to share what we’re doing with the world. We’re at the dawn of what live streaming can do for us right now. We’ve wanted to do this for a long time. We looked for the right solution and the right partner, and that was NewTek. TriCaster is the most amazing piece of equipment in the world for live streaming.”

Often video productions originating from the Bus are destined to serve two audiences: those who will watch live online as an event happens and those who will watch a show to be distributed more traditionally, such as on TV or on DVD, after the event. Differing expectations between the audiences and unique technical characteristics of each distribution medium create a production challenge. 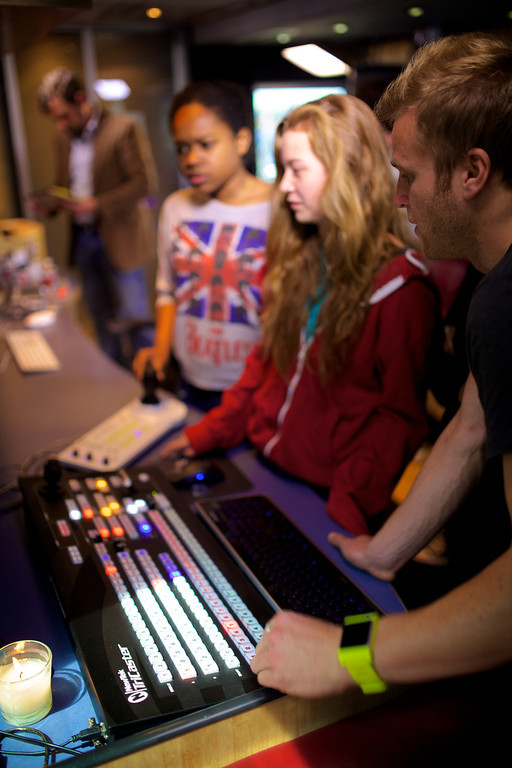 How can producers on the Bus create a live show to be streamed at no more than 850kb/s so that viewers watching via the Internet can watch a high-quality show unencumbered by annoying buffering while at the same time capturing all HD video sources at their maximum resolution to build a complete show later in post-production?

The answer is TriCaster 850 EXTREME’s pioneering IsoCorder multitrack video recording that allows up to eight camera inputs to be recorded at full resolution, while simultaneously streaming program out at a bit rate that’s acceptable for an Internet audience.

“Because TriCaster can record on multiple tracks, we’re recording the full resolution program output in the TriCaster,” said Sobel. At the same time, producers on the Bus are encoding the live event at 850kb/s and streaming it from the TriCaster. “So we’re still keeping the full HD quality that allows people to watch the program live at a very reasonable bit rate live stream,” he added.

To stream live shows from the Bus, the production crew relies on a satellite uplink mounted to the top of the vehicle. TodoCast, the company providing the uplink, is responsible for the bandwidth needed to contribute content and manages all aspects of online delivery.

Inside the Bus, three compartments that can be separated by special sliding glass walls, serve as control room, studio and chromakey set. Five robotically controlled Sony HD cameras are ceiling mounted throughout the bus, giving good coverage of the interior. These cameras are permanent and controllable from the switcher area.

“We also have mobile Sony HD PMW-EX1 and PMW-EX3 video cameras that can patch into TriCaster so that we can get more creative positioning and movement by mixing those in with the robotically controlled cameras,” said Sobel.

“On top of that, depending on the event, we can use prerecorded video on the DDR, plus more graphics that we fly in there, as well.” 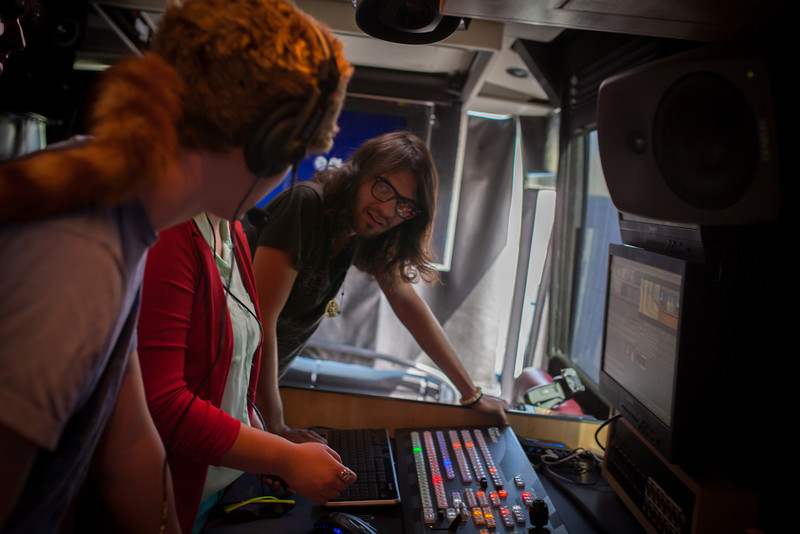 Recently, producers on the Bus have begun experimenting with TriCaster Virtual Set Editor that will allow them to add a new level of creativity to their shows.

“The virtual sets turned out to be a really cool thing. Because we have a green screen, a Reflecmedia Chromatte fabric system set up in the back of the Bus, we did a couple of mock set-ups where we put people in various virtual sets. We were really blown away by the possibilities there. We’re having custom virtual sets designed for us, which we’ll be using in a lot of upcoming videos that we’re planning.”

TriCaster’s virtual sets give students an opportunity to be a broadcaster for a day, said Tanner. “The ability to live key a green screen alone has lit up the faces of hundreds of students from the dozens of schools we’ve already visited this year,” said Tanner. “Seeing their friends go from being in front of a piece of green reflective fabric to a virtual newsroom within seconds is so intriguing for them, and adds a level of magic to the Bus experience that is hard to equal.

“And from a novice standpoint, the device isn’t hard to use,” said Tanner. “It takes literally seconds to explain the difference between the program and preview channels, as well as the fact that each number corresponds to a different angle. And as most know, that’s just the tip of the iceberg. The learning curve is extremely smooth, and the TriCaster’s depth is insane. There’s so much you can do with it, and it’s made our lives on the Bus so much easier.” Creative, Practical.

The producers on the Bus not only have taken advantage of the traditional video production switcher capabilities of TriCaster, but also have identified ways to leverage its unique production features to add new levels of creativity to their shows. 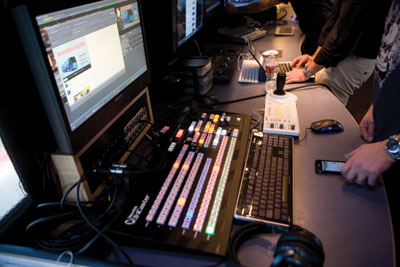 For example, TriCaster support for the Apple AirPlay wireless link from iPads may soon add a new element of creativity to shows about aspiring musicians participating in workshops. “We’ll do our standard workshop with the students where we have them create a song and shoot a video, but we have them work predominantly if not exclusively on the iPad and iTouch” said Sobel.

“One of the nice things about the TriCaster is that with the AirPlay technology, we can send the displays from the iPad over to the TriCaster and get actual display feed off the devices, which is really cool.” As an added benefit, there is no need to send a camera operator out to the workshop just to do over-the-shoulder shots of students running music software on the devices because their on-screen work is transmitted directly via AirPlay to the TriCaster.

Another example is the TriCaster’s built-in audio mixing capabilities, which make setting up and producing some show segments easier, said Sobel. While the Bus uses Avid Pro Tools to mix its musical performances, there’s often a need to mic and mix interviews before a set. For this application, the producers on the Bus use the TriCaster’s eight-input audio mixer to mix interview segments and then immediately take a Pro Tools mix of musical performances, he explained.

While AirPlay input support and audio mixing aren’t the kind of capabilities typically associated with a professional video production switcher, a logically laid out, easy-to-use control panel is, and here too, TriCaster delivers for the producers on the Bus with the TriCaster 850 CS control surface.

The control surface, which is a tangible, control-for-control match of the TriCaster 850 EXTREME virtual interface, makes doing live shows easy. “When you start using the TriCaster 850 CS, it’s hard to imagine doing a live show without it. It’s intuitive and totally reliable,” said Sobel. 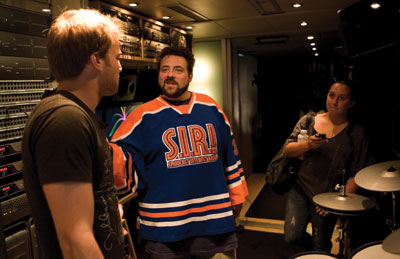 The Lennon Bus spent a week in March at the South by Southwest Conference in Austin, Texas, where it live streamed interviews and performances every day, including an interview with filmmaker Kevin Smith. Among the live streamed performances was an acoustic session by Rachael Sage, The John Lennon Songwriting Contest winner.

Austin is a long way from the live national broadcast 15 years on ABC’s Good Morning America, that gave birth to the America idea for a mobile production studio to help children make their dreams a reality, said Rothschild. At that time, the Bus simply was intended to be a short-lived promotional vehicle for the John Lennon Songwriting Contest, which Rothschild, music manager David Sonenberg and Lennon’s widow, Yoko Ono, created in 1997.

Back then, students wrote, recorded and performed a song on the morning show. Today, however, people around the world can share in the mission of the Bus to reach young people interested in music and audio and video production—not simply at limited venues where it appears, but worldwide via the Internet.

“TriCaster is at the heart of those events, helping us to complete our mission and spread our message to the world. We are so happy to have this tool at our disposal and love sharing it with those who step aboard be they young, old, big or small,” said Tanner. 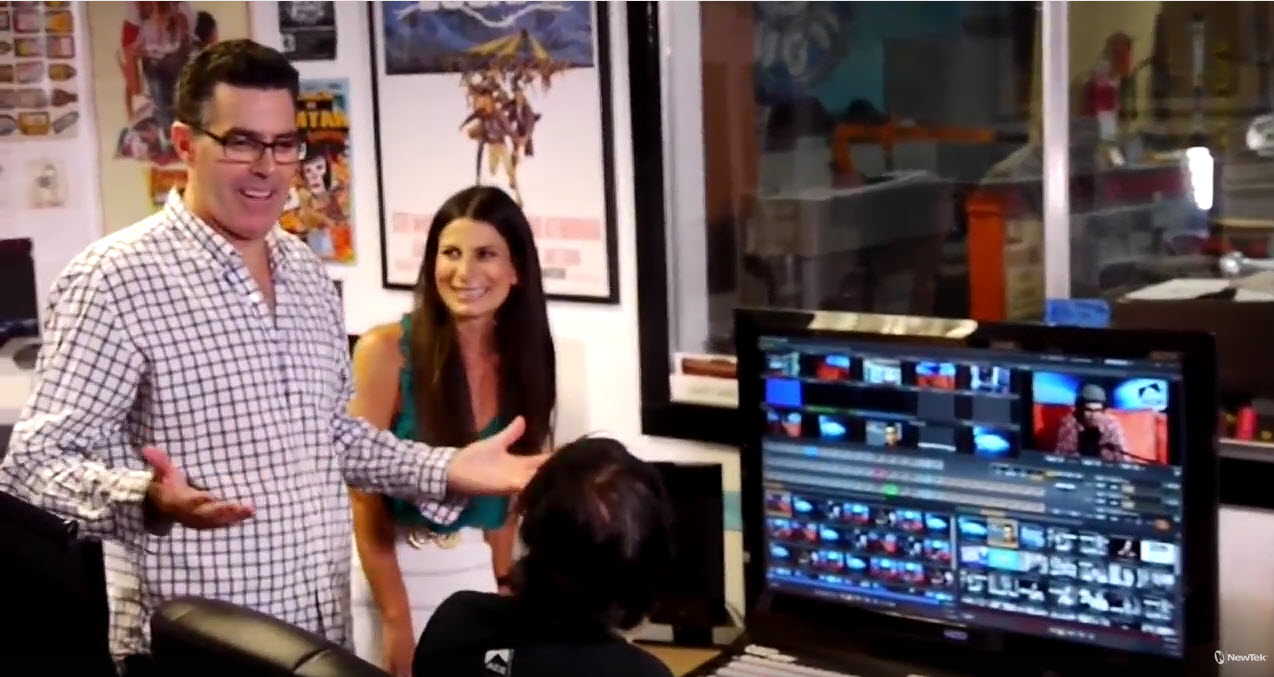 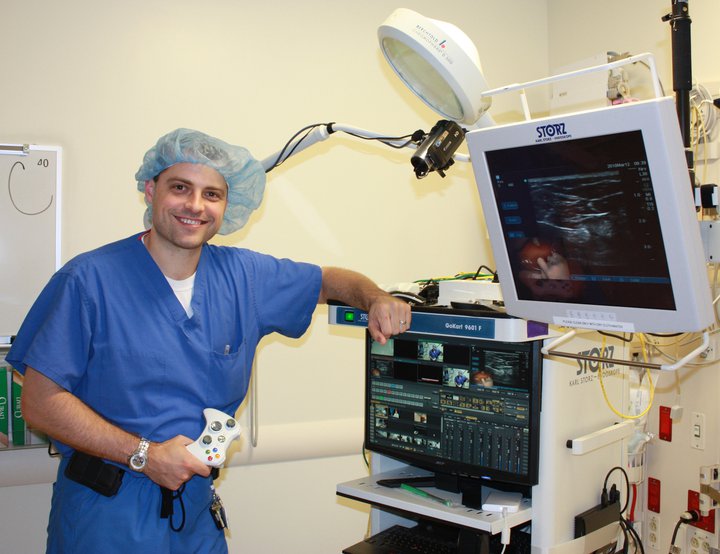