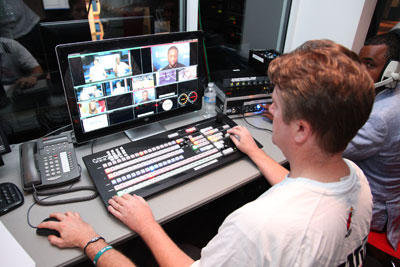 In July 2010, the Miami HEAT really caught fire when LeBron James and Chris Bosh joined the team, elevating the franchise from national prominence, to true global popularity. With the re-signing of Dwyane Wade, the HEAT assembled three, star players to form the core of what is now a team drawing unparalleled passion and interest from its loyal fan base in South Florida, and far beyond.

As the new team prepared for the 2011 NBA playoffs and one of the most exciting runs in franchise history, the organization was left with a significant programming dilemma. Without the assistance of their regional broadcast partner, how could they deliver important pre & post-game content to their fan base? The answer came in the creation of a unique internet solution: HEATV on HEAT.com. The team decided to use its award-winning broadcast and production team to produce programs for each post-season game, beginning in the Eastern Conference Semifinals, and stream it on its incredibly popular website, HEAT.com. The challenge lay in just how to accomplish this goal with a staff that was used to more traditional means of remote broadcasting.

The solution came via a suggestion from their colleagues at the NBA, who had been using TriCaster on their Development League and WNBA broadcasts for several years. “In our efforts to inform the league about our new venture with HEATV on HEAT.com, we were exploring with them all types of production solutions that involved large remote production facilities, satellite transmission options, and various video streaming options,” said Executive Director of HEAT Broadcasting, Ted Ballard. “As our alternatives became more complicated and costly, it was Steve Hellmuth, the NBA’s Executive Vice President for Operations and Technology, who suggested we consider using TriCaster. A week after our conversation, they shipped us one of theirs to try out, and by early May, HEATV on HEAT.com was a broadcasting and internet reality.” 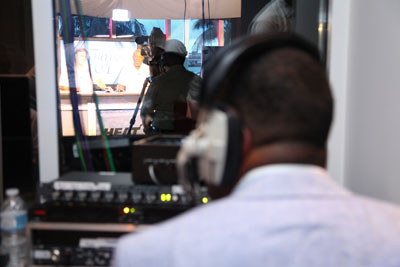 Priced at under $50,000, TriCaster provided the firepower comparable to a hi-definition mobile facility, for a tiny fraction of the cost. With the versatility provided by the TriCaster’s eight HD inputs and their own in-house SONY routing system, the HEAT were able to incorporate an impressive number of sources, ranging from edit stations, to cameras and tape decks. Add to that the device’s exceptional ability to use keyable graphic animations, DDR playbacks, keyable and still graphics, and a vast array of music cuts, and what the team had at its disposal was the functionality of a traditional television truck in the space occupied by an eight-foot folding table.

“We knew we were going to go the TriCaster route for two reasons: this venture was going to be self-financed and streamed on the Internet,” said Ed Filomia, Senior Director of Broadcast Services for The HEAT Group. “While we didn’t know how it was going to work, TriCaster immediately surpassed our expectations. Without the TriCaster’s attractive price-performance, we could never have gotten this endeavor off the ground, and we would’ve missed an opportunity to capitalize on a really exciting time in our team’s history.”

Now in their second season of this venture, the HEAT have once again pushed the limits on how to maximize the use of TriCaster. In addition to the shows they stream on HEAT.com, the HEAT now also produce a live post-game show that airs on their regional cable television partner, Sun Sports. The latter is streamed simultaneously on the team’s website outside their local market and around the world. “This ability to provide high quality, high level production to both a broadcast and broadband environment in parallel fashion is what separates the TriCaster technology from anything in its class,” notes Ballard. 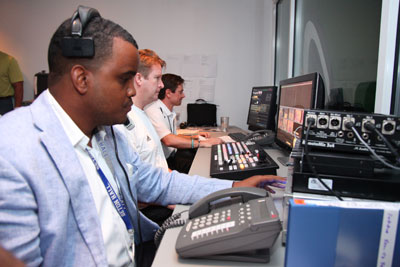 Roughly an hour before the Miami HEAT take to the floor for their home and away playoff games, visitors on the HEAT.com homepage see the video begin streaming, and soon hear the familiar phrase from one of their most familiar hosts, Jason Jackson, who begins each show in the same welcoming fashion: “It… is…. time…for HEATV on HEAT.com.” Then, beauty shots of the Miami skyline at magic light transition to the show’s host introducing live and pre-recorded segments from his studio desk. The fast-paced program incorporates a host of HEAT talent, and weaves live interviews with fans on the concourses and plazas of the American Airlines Arena (the HEAT’s home court), seamlessly with game highlights, player stats, interviews, and more.

“With our close relationship to the team, HEAT fans get behind the scenes access they can’t get anywhere else,” said Ballard, who also directs the live pre and post-game shows that have aired on HEAT.com and Sun Sports (the Fox Sports regional affiliate). “When HEAT players see our announcers and cameras courtside or in the locker rooms they feel comfortable because we have been with them all season, and in many cases for several years. We are able to engage them and in turn, our viewers, in a way that others simply can not emulate. Our team provides us with unique access to our players before and after every game, and that is something that our fans ultimately appreciate, and is a large part of what draws them to our coverage,” he added.

Everything about this production design and infrastructure is innovative and resourceful. For example, the HEAT.com crew borrows a half dozen cameras, which are not in use before or after the game, from the closed circuit broadcast produced in arena and branded as HEATV, , including a wireless RF unit.

These roving cameras are just the tip of the iceberg in terms of the variety of sources feeding the NewTek TriCaster 850, which resides in a small “mini-control room” on the lower level of American Airlines Arena. Since TriCaster only has eight external video inputs, the crew uses a router to manage over a dozen HD-SDI sources with embedded audio, including two Sony EX 3000 cameras in the small adjacent studio (with chromakey backdrop), six tape machines including HD cam, XD cam and HD DVC pro units, as well as the output of two Avid editors used to cut highlight packages.

The intuitive interface also has a full digital audio mixer and tools for creating digital video effects and transitions, and the operator can monitor all of the video signals, as well as the preview and program signals, on a widescreen multiview display.

“TriCaster serves as the hub of this operation and virtually everything runs through it. Our engineering setup is designed to maximize TriCaster’s capabilities and all of the production resources at our disposal,” said Filomia. “This complex workflow includes several high-performance networks, which together provide redundancy, as well as a variety of incoming feeds.” 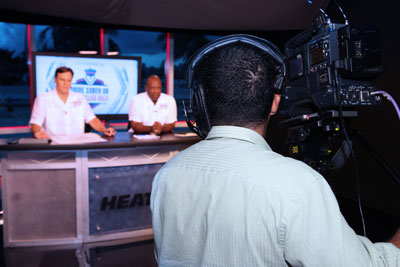 The first network is the NBA’s H-SAN 100-Megabyte bandwidth, private fiber network that connects all NBA arenas nationwide and the NBA headquarters. It delivers NBA press conferences and highlights from other games in the league, and is used by the production team to feed various materials to their studio from the remote site on away games.

The second network is a Level-3 VYVX fiber network service used to backhaul live video from away games. This is the primary live fiber feed for the talent stand-ups and interview feeds that are sent from the site of the away games the team plays in the playoffs. The third network consists of a Teradek Cube that lets crews transmit HD-SDI video over IP networks from remote production sites back to the control room. These three feeds—as well as video assets shared between the HEAT.com studio and the HEATV control room situated on the top floor of the arena—are routed via the arena’s I/O panel located at the TV truck docks.

Finally, a dedicated output of the TriCaster is sent via a separately encoded fiber path to Sun Sports/Fox Sports master control facilities in Woodlands, Texas for commercial integration at their network operations center, which ultimately allows for simulcast of the post-game productions on the regional cable network.

“In keeping with our goal to keep costs down and quality up, our two biggest expenses are travel and transmission. Because of the complexity and versatility of our studio workflow, we decided to backhaul live HD-SDI video from away games rather than send our road crews out with a TriCaster in a fly-pack,” Ballard points out.

“Away games are logistically challenging to produce because we’re trying to accomplish the kind of workflow that typically requires a big truck, but we don’t have a truck,” Filomia added. Besides the fiber and cable runs for the two Sony PDW 700 XDCAM ENG cameras, the road crew also arranges for a dedicated 6-Megabit Ethernet line for the Teradek Cube, and a phone line to support IFB communications with the home studio.

Live graphics—another essential ingredient to any sport show—also required a new way of working with TriCaster, compared to the dedicated live graphics systems found on mobile production units. The pre and post-game shows on HEAT.com utilize images created through Chyron Lyric, the graphics composition software program associated with the Chyron Duet HD graphics system. Last year, their director/graphics operator, Bob Hewitt, created live graphics with Lyric on his laptop and exported them to a thumb drive. “We would then import those images into TriCaster from the thumb drive, but that entire process was rather cumbersome for a live show,” said Ballard. “This year, Jorge Dighero [NewTek’s Regional Sales Manager for Latin America] set us up with a feature called LiveText, which enabled us to treat his computer like a network connection. Now, TriCaster treats that laptop like a hi-def Chyron. Compared to how we worked last year, this is a significant improvement to our operation.”

“For our post-game show, we have to use Fox regional sports graphics with a specific branded look. You can imagine how hard it would be to recreate those just within TriCaster alone,” Ballard said. “So, the mere fact that we can use Lyric functionality on a laptop to build those graphics is a tremendous advantage.”

For player, team, or league stats, Hewitt looks up the data on the Internet and inputs it manually into the graphics. In the future, the team is hoping to migrate to a process that would possibly allow for the input of real-time data streams into its graphic creation.

A New Way of Working 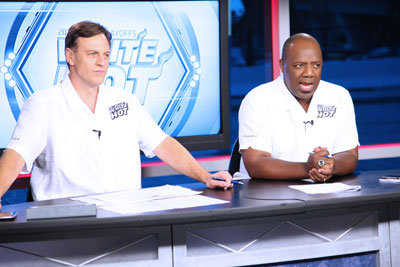 Ed Filomia was aware of the TriCaster technology long before the team decided to employ it on this particular project. While the system dramatically evolved in capabilities during that timeframe, he regretted not buying it sooner. Even when the decision was made to use TriCaster, there was a fair amount of skepticism that it could meet their needs in this live application.

“We consider ourselves technically savvy, experienced production people, but we had no idea what we were doing heading into our first year,” Filomia said. “Compared to operating on a production truck or in a production control room, there was a significant learning curve in adapting to the TriCaster mode of operation. While it’s a user-friendly system, truthfully this workflow is different from all the bells and whistles we’re used to having on production trucks. But the TriCaster workflow quickly became second nature to us, and it’s the enabling technology behind this venture. “

In the second phase, they’re hoping to build a more permanent studio and control room, and expand into new territory like virtual sets, which TriCaster supports. And Ballard said, “Considering the real Miami heat that builds up in this basement control room, we’re one air conditioner away from paradise.” 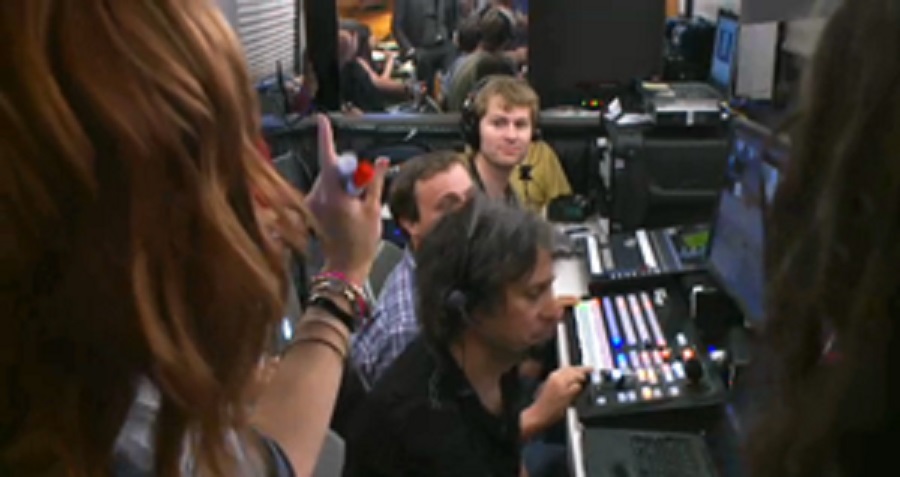