Many companies release a product designed for a specific purpose only to discover that their customers use it for something entirely different. Thomas Edison didn’t think his phonograph would be of any use for music reproduction, for example. In one recent case, the company making the product made the discovery before its customers did.

For NewTek, that process of discovery happened just as it was preparing to roll out a very promising new product called TalkShow, in a webcast to the world.

Just as production on the webcast began, director Rex Olson was unable to make it to the studio. The solution? Use TalkShow to allow him to watch the production remotely from his house in Los Angeles while directing the studio staff and on-camera presenter on location in San Antonio from his laptop computer, in real time. TalkShow was not only the subject of the webcast, but also the key player that facilitated the production itself.

TalkShow is a standalone hardware product intended to allow any broadcaster or video producer to seamlessly integrate remote Skype video callers as guests into any live production.

According to Olson, “It was no different than being in the room. I was able to communicate with my technical director, set up the shots, make adjustments, do camera blocking, do a run through and then direct everything live. In the past, it would have taken a lot of work, but with TalkShow, we just set it up and did it.”

Using Skype before the availability of TalkShow was possible, but not really desirable because of the complexity and lack of reliability. It required cobbling together a custom set-up with a dedicated computer, video capture device, and scan converters. But the hardest part was figuring out a separate way to alert the caller and let them know that they were live.

Olson points out another major failing of attempting to integrate Skype in the past, “With TalkShow now we don’t have to deal with all the interruptions. In the past if another call came in, that information would show up on screen, or warnings and advertisements and announcements could also interrupt a call. “

The genesis of directing the show remotely didn’t happen until right before production began, recalled Lennie Nelson, Technical Director for the webcast.

“While we were actually setting up I would have Rex call in and I’d ask him to take a look at the set up while we were setting up lights and setting up our cameras. And then I had Scott (Gentry, NewTek’s VP of Marketing and the webcast’s on-camera host), come in and we kind of realized at that moment that Rex could just stay on the line and direct, instead of adding to the workload of the people in the studio. It really facilitated a need that we didn’t know existed at the time. But by having Rex there in communication with us, it made the whole process flow a lot smoother because I didn’t have to worry about whether the performances were good. Rex could make that call and I could focus on the technical side of things.”

Check out a recording of the webcast here.

TalkShow uses Microsoft Skype TX to make and receive video calls from any Skype enabled device, even mobile phones. TalkShow converts the Skype call into a standard, professional video and audio signal through embedded HD-SDI or through HD-SDI video with analog audio. Skype calls have been used in broadcast productions before, but relied on jury-rigged set-ups custom-built from random third party hardware and software with little or no control over picture or sound quality.

At the studio they were using multiple TalkShow units. TalkShow is peer-to-peer, so for each call that’s online simultaneously, you need a TalkShow unit. One unit was handling the call from Principal Program Manager Skype TX, Simon Lucas, in London; one unit was dedicated to the call with NewTek’s president, Dr. Andrew Cross; and a third unit was handling the communication between the studio and Olson in Los Angeles.

TalkShow is not just a simple video and audio feed from a network Skype call. TalkShow’s capabilities are much more in line with the two-way communication that is often employed with more complex satellite delivery. TalkShow – especially when there are TalkShow units on both sides of the connection – allows for a video and audio feed into the studio, but also for a return feed of the production back to the interviewee as well as back-channel “IFB” communication between the studio and the interviewee that is not part of the production feed, so that the interviewee can be cued and prompted by the producer or director while listening to the program audio at the same time.

Nelson used those capabilities to allow Olson to see the production and communicate directly with the in-studio talent and crew with a separate audio feed for the production. He points out that with the latest software and firmware upgrades for TriCaster it is now possible to have Olson control the switching himself remotely.

A big part of making this project a success was NewTek’s integration of Dante audio support. It allowed the routing and configuration of multiple mix-minus audio feeds in TriCaster so that each remote interviewee could be fed audio of the director and other participants without hearing himself returned in the mix. Olson explains, “Scott Gentry had an IFB earpiece in so I was able to talk to him and cue him while the interview was going on”. It also sent the director’s audio to the correct people in the studio and to allow the director to cue the interviewees and on-camera talent without his audio being part of the program itself. 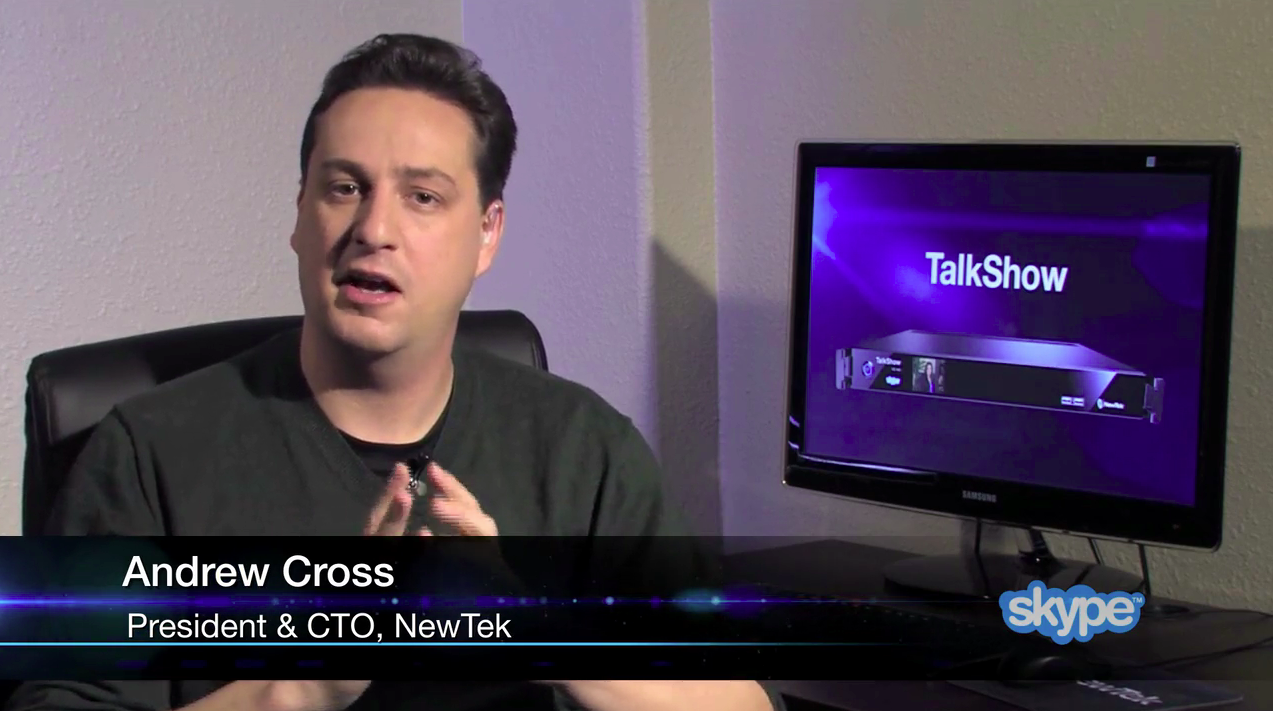 Through the Dante audio capabilities of TalkShow and TriCaster, it’s possible to route that back-channel communication from virtually any audio source. In the case of this production, the audio was fed to the IFBs from the director’s remote laptop computer.

TalkShow also provides a Talkback feature which is a seperate audio channel to communicate with a caller while an interview is going on. Nelson expands on this thought, “It’s a separate feed or line in the system and you can just press a button and talk directly to that caller and it doesn’t bleed in or interfere with the main program line feed. That’s all built in and one of the many things unique to TalkShow.”

The primary intended use of TalkShow is to allow any one of the 300,000,000 monthly worldwide Skype users – or anyone else who wants to install Skype – to remotely and interactively be part of a TV production or webcast. But in the case of this production, there were actually TalkShow units on both ends of the call. This allowed for greater video and audio quality. The interviewees in London and San Antonio were able to use professional quality cameras and microphones fed into their local TalkShow units instead of using a typical webcam and built in mic.

Nelson provided this detailed schematic of the equipment used and the routing of signals within the studio and out to the dedicated TalkShow units: 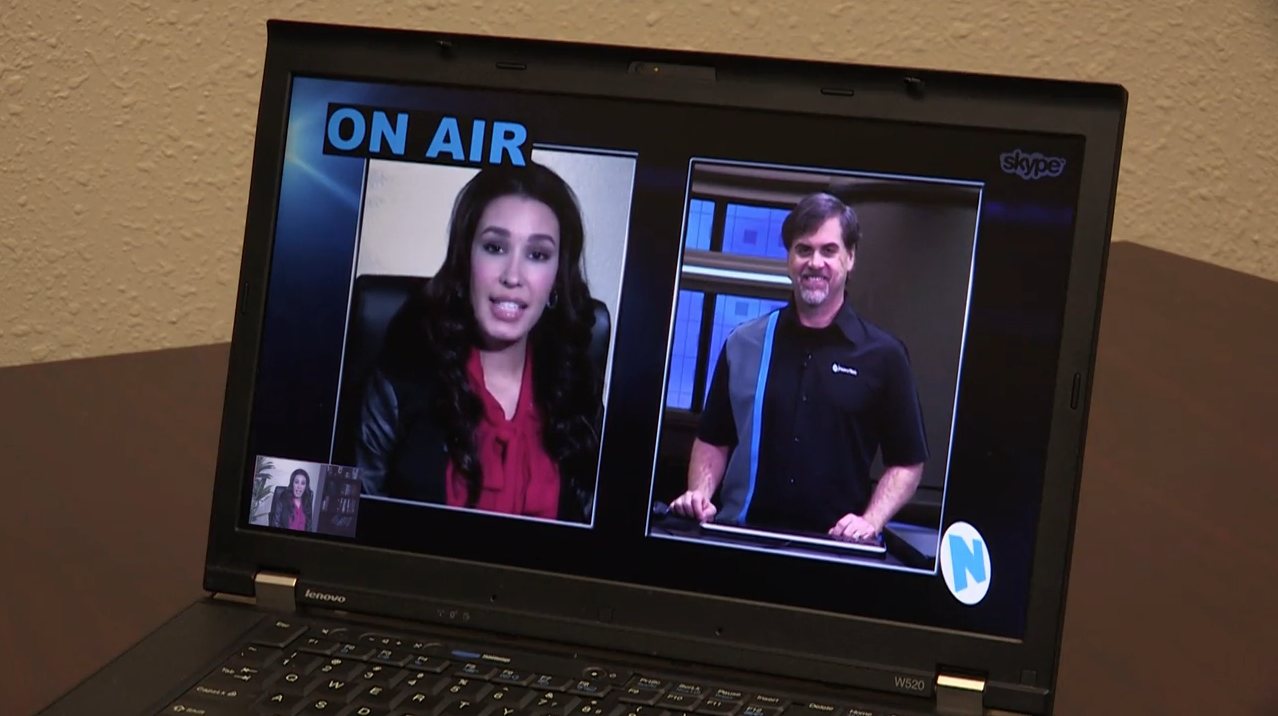 While TalkShow is made to be used in conjunction with the rest of the equipment usually associated with live broadcast television or webcasts, such as switchers and mixers, or NewTek’s own studio-in-a-box TriCaster series, it’s possible to simply use two TalkShows on both ends of a remote conversation to enable high quality telepresence. TalkShow can also be used to do distance training with multiple TalkShows being “fed” by single TalkShow presenting a class with each of the “student” TalkShow systems able to ask questions and participate in real time. 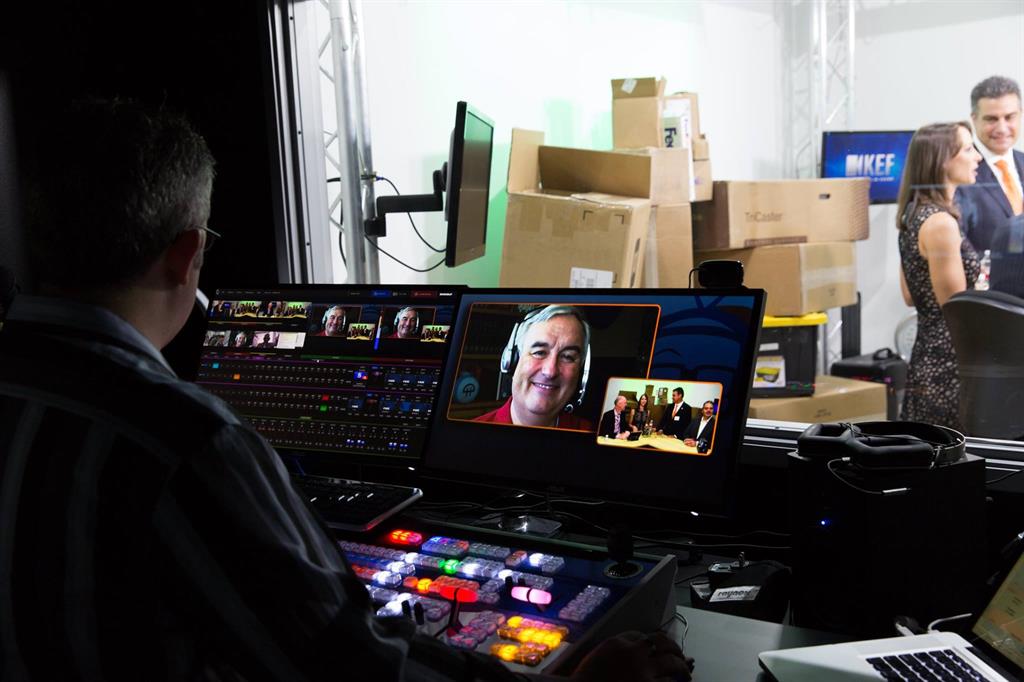 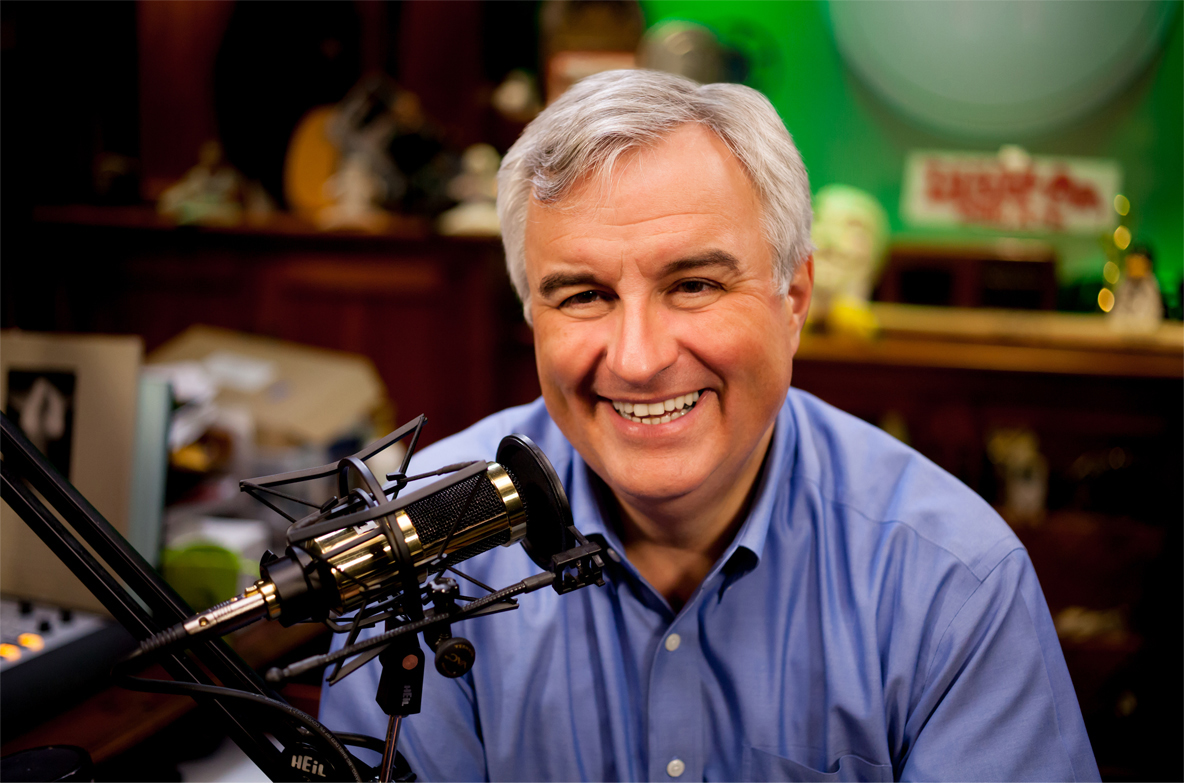