There’s little doubt that the average age of video professionals is declining yearly. Low-cost mobile device video capability, laptop and mobile-based editing, GoPros, drones and even studio equipment reduce the barriers to learning and entry. Even young teens can get into professional video production!

This decline in cost and barriers creates challenges for everyone. Clients expect vendors to be well staffed yet competitively priced. Vendors expect freelancers to be mature, disciplined and experienced. Teen technicians want to be respected and judged by their skills, not their skateboards. Quality technical training is the key to meeting all the challenges. But teens are not likely to go to NAB seminars and YouTube tutorials do not offer the teamwork experience that makes a great crewperson.

Spotswood High School in Spotswood, NJ is equipped with a full studio production facility that serves the local community cable network and also broadcasts online at YouTube at “SPSN Studios” and Twitter at “SPSN Studios @azaborney.” 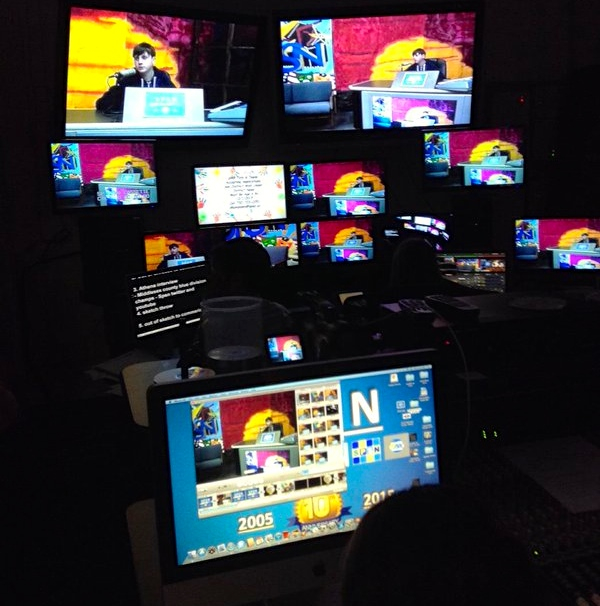 Are They Streaming? And If So, How?

The facility, which is operated completely by students, includes two radio stations running on Adobe, several video editing stations running Final Cut Pro and iMovie, and a 4-camera TV studio with a switcher and 26-channel audio mixing board, feeding into a TriCaster for streaming. Andrew Zaborney, a teacher at the school, describes some of the action that takes place on a weekly basis, “Our studio features several sets designed and built by students, which are switched around to offer an average of three new shows per week. For instance, this week we’re producing, “Spotswood Tonight,” a talk show; “Huddle Up,” a football program; and “Sports Talk” a live radio show.”

Both a Club and a Curriculum

Zaborney uses the facilities both to serve as a core of several extra-curricular activities and clubs and to support the school’s concert performances and programs. “I teach ‘TV-1,’ which includes such basics as scriptwriting, set design and editing, the object of which is to finish the course producing 30-second commercials. The curriculum also includes producing a 30-minute live infomercial using the studio and control room staff to train team interaction. That’s the big project in ‘TV-1.’

“In ‘TV-2,’ the students produce all the broadcasting elements that we put up on YouTube. These programs are featured weekly on our Fios 43 and Xfinity 26 local access channels. The students are responsible for all the tasks from concept, design, production logistics, studio and field producing, camera, some editing - all the work right up to online distribution.”

Part of the challenge is for the students to produce work that will later become part of their professional “show reel,” the most necessary element to getting a job. Obviously, quality and speed are always at odds with each other in terms of creating good work. Zaborney likes to create a high-pressure environment for his students, emulating the real world, no-compromises workplace. “Because we have to move really fast,” says Zaborney, “I do end up doing 50% of the editing myself because the students have to work within a 42-minute classroom period. One or two students might choose to specialize in editing, but generally, the students give me all the footage and I can give them the satisfaction of seeing their show online and on the channel schedule in pretty much one, 8-hour day.” 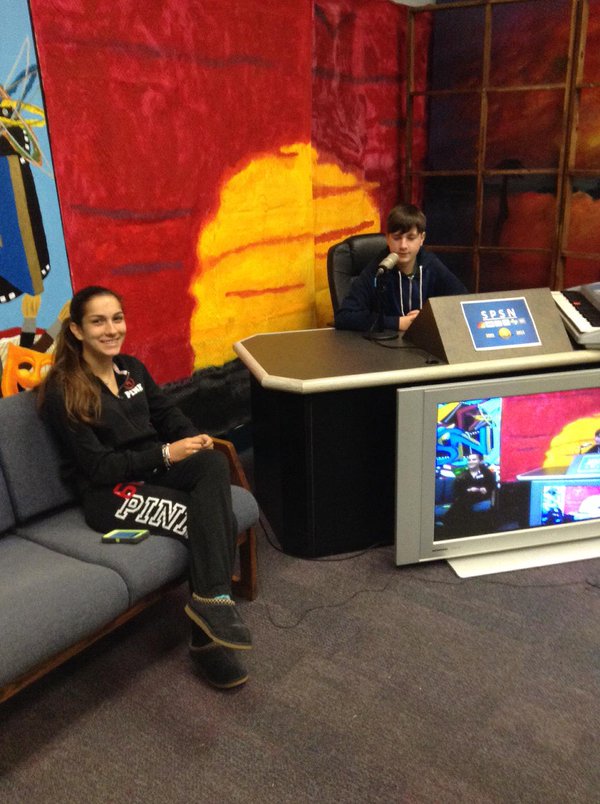 Another level of challenge is introduced in the “TV-3” course where students get to work for real clients who range from several high school clubs and extra-curricular activities like the orchestra or football team - on up to local town business owners - who may call upon SPSN Studios to deliver date-certain, quality programming. “The music department, for instance, might have a concert coming up and needs a commercial to promote it,” says Zaborney.

But then real-world pressure is added. As Zaborney explains, “Sometimes we’ll get a local businessperson as a client and the students will then have to work as a small advertising agency, to design a commercial for them that is to their liking, so they get to execute the whole concept of independent work under the most demanding of circumstances.”

Getting a fully functioning video production facility built in a high school is not easy to do. Zaborney is now in his tenth year at Spotswood High, but before coming to education, he worked in video production at ESPN, pharmaceutical advertising, and “The People’s Court” television program, where he says, “I learned really boots-on-the-ground, working for writers, producers, directors.”

Relating to one of his first jobs, he said he just walked into a production trailer and asked, “Has anyone got a job for me? They thought I worked there already and assigned me to do the wireless down feed. I was 24 years old. What did I have to lose? I got to meet some fantastic people and started a great resume.”

Such experiences have served Zaborney well as he imparts his real-life experiences to students and then watches as they vie for competitive job openings after graduation. “We just had a young man, Anthony Pietanza from our school who just started working with the New York Giants. He was one of the hosts of our high school sports program, went to William Patterson University, where he worked in their communications program. On graduation he was hired by SUNY (State University of NY) Long Island, to be their video tech and at the same time started interning for the Giants. He just set up camp when the Giants called and offered him a full-time job, so he came back to New Jersey. At just 23 years of age, he came back last week and lectured to the students in our studio.” 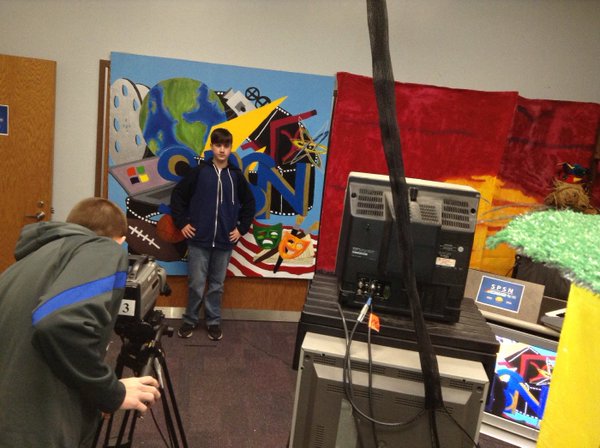 Like most educators, Zaborney is yanked in dozens of directions at once but patiently tries to take care of every issue, be it personal or technical. “We use the TriCaster 40, which right now is being used as a switcher. All our basic analog Panasonic AG-188 cameras and our mikes are connected so as to do a dual recording. To be honest, I’m still working out all the bugs regarding streaming, and I’m taking that day by day. It’s a fun adventure for everyone. We’re hoping to paint our whole studio in chromakey green soon and hope to launch the streaming feature in the future.”

Tips on Getting Your High School on the Air

There are two main hurdles in making an otherwise non-video high school into a modern video training facility. The first is organizational, the second is financial. It’s best if a well-respected teacher with strong student, parent and administration support champions the effort by creating a proposal that describes the educational and career benefits, the cost in terms of space and equipment, and a sample curriculum of courses to be taught.

This proposal will inevitably travel up the school’s chain of command and eventually to the Board of Education and perhaps even top municipal decision makers. For the final hurdle with a mayor and town board, it is beneficial to outline how a tele-production facility can be used beyond the high school environment as a communication tool for government, community action, and public relations. Often, an enthusiastic town council will become an enthusiastic supporter. 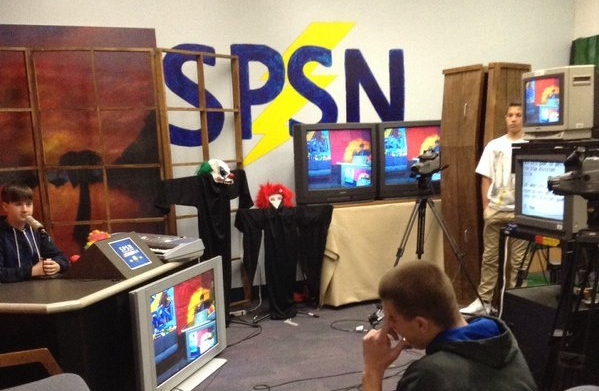 Budgeting is always a challenge. Faced with ever-shrinking municipal budgets, the champions of a high school video facility will need to be creative in finding funding. They key will be if your municipality allows outside financial support for education. Some do not. In such a case, it may be necessary to structure the facility as an extra-curricular “club” activity, which can be supported by parents, local businesses and charitable grants. However, once the initial success of the facility is shown, this can become a project with many people seeking to become sponsors - ironically, after the fact.

Enthusiastic educators, encouraged by Spotswood’s success are encouraged to contact their local video equipment vendors, corporate sponsors and even retired video professionals who themselves may be looking for a way to pass their skills on to the next generation! 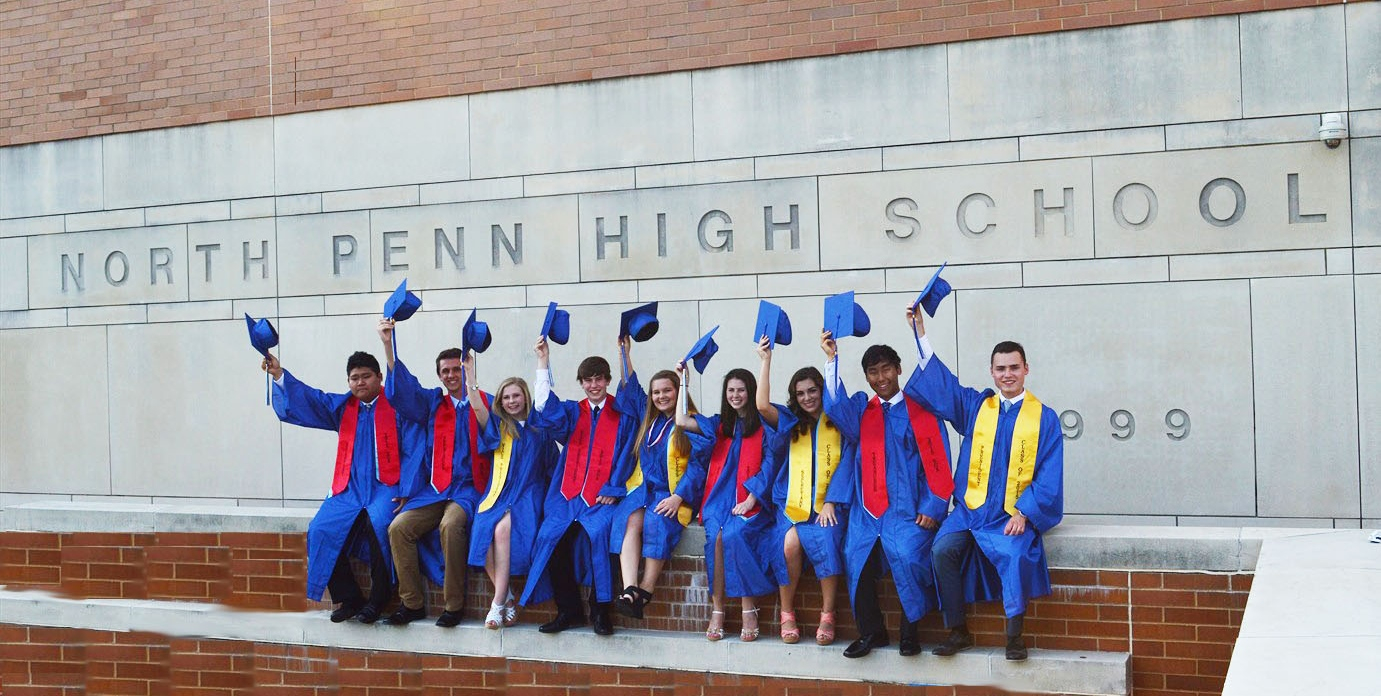