Successful Saltillo TV news workflow to be rolled out across Mexico

Just an hour’s drive from Monterrey, a major industrial center in northeastern Mexico, the City of Saltillo is brimming with newsworthy events, enough to fill an entire broadcast day.

That’s precisely what a local TV station in Saltillo started doing in December 2016—offering eight hours a day of live news reports—branded as Telediario—tailored to the interests of Saltillo and its neighboring cities.

Telediario is filled with live field reports, network feeds, and remote interviews with people from around the world. Its on-air presentation is also rich with full-screen graphics, lower third supers, chromakeys, and other sophisticated touches that today’s TV news viewers expect.

“The demand for live local news in Saltillo is very strong. That’s why we felt compelled to deliver a lot of high-quality live local news, including breaking news, political news, sports and human-interest stories of interest to Saltillo. This NewsCaster/TriCaster combo makes it possible to produce a lot of content with a small amount of people. It’s the perfect newsroom solution for our smaller TV market,” said Enrique Calderon, information technology manager for Grupo Multimedios, Mexico’s fourth largest TV station group, based in Monterrey, Nuevo Leon, Mexico.

With the success of its Saltillo TV news operation, Multimedios is now considering deploying the NewsCaster/TriCaster workflow to the 10 or so other local stations it owns and operates, primarily across northern and central Mexico.

Multimedios owns and operates the Saltillo station—in the Mexican State of Coahuila, as well as XHAW-DT (Channel 12), its flagship station. As a ratings leader, XHAW reaches 85% of Monterrey’s five million people.

Multimedios built a brand new TV news facility and production studio in Saltillo just for this local news initiative. According to Calderon, the project began in September 2016, and it took approximately two months to complete the systems integration and installation.

Initially, Calderon said, “the workflow was set-up and tested at the Monterrey facility before being moved into place at Saltillo. The start-up phase also included extensive technical training and rehearsal of the staff, many of whom came from other TV stations.”

Since their initial newscasts, the lineup has scaled from three to eight hours of live news per day, or roughly 56 hours per week. Given Saltillo’s tight budget, this level of content creation would not have been possible if they had taken the conventional route, by installing heavy iron newsroom production equipment instead.

According to Lan Merrill, VP Sales and Marketing for NewsMaker Systems, in Los Angeles, CA, “Installation and integration of NewsCaster and TriCaster within an existing facility is relatively simple due to the systems’ inherent IP-based workflow.

“This is the essence of the charge both NewsMaker and NewTek are leading into the brave new world of IP,” Merrill said. “The benefits of this IP-based design also include lower capital and operating costs, with less ongoing maintenance. Journalists can spend less time being hampered by outdated technologies, and more time crafting great stories, with major market production values.”

Since NDI (Network Device Interface) and the NewsCaster/TriCaster workflows are completely IP-based, there are no legacy analog or digital audio, video or data cables in the entire workflow, including: between the newsroom computer system, the news rundown automation, and the news production playout system.

“Traditional old iron systems require miles of expensive and complicated cabling to connect all of these devices in an antiquated news production system,” Merrill said. “The NewsCaster / TriCaster system only requires a single Ethernet cable.” 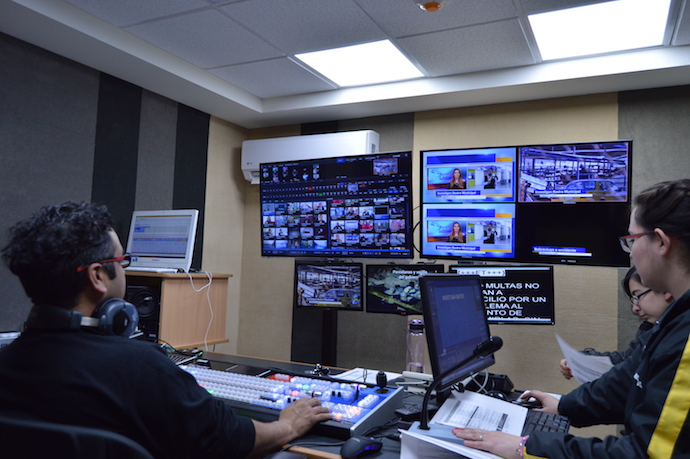 Saltillo began by building on its existing license of ENPS by The Associated Press. ENPS is an industry-standard newsroom software that lets journalists track and manage all of their news stories, media assets, such as videos and maps, and the news rundown for newscasts.

“We also knew from the start that we wanted to base our newsroom production workflow on TriCaster, and control the entire workflow from a single user interface,” Calderon said. “We then looked for a newsroom control system that would seamlessly interface with both the ENPS and TriCaster to form a unified workflow.”

With its support for MOS protocols, NewsCaster Connect interfaces seamlessly with ENPS, as well as TriCaster. It serves as a bridge between ENPS and the TriCaster by controlling the workflow between the two systems. For example, NewsCaster Connect can bring media assets stored on the NewsMaker server into ENPS, as well as use ENPS resources to automatically create and transfer a news rundown directly to the TriCaster, and it’s immediately ready for air.

Now at the Saltillo station, when a video package is produced in the studio or field, that clip is deposited onto the server, and journalists can browse and access that database using the NewsCaster Connect plug-in within ENPS. NewsCaster Connect also offers tools that let journalists create their lower third supers, CGs, graphics, and voice-overs for use in the newscast. Whenever you drag and drop a story into the program rundown for playout from the TriCaster, the graphics automatically follow along with the story.

“It’s advantageous that NewsCaster Connect can be accessed by journalists from an active-X window embedded in the ENPS user interface so they can use it without having to leave their main newsroom software environment,” said Merrill, whose company, NewsMaker Systems, markets a full line of NewsCaster newsroom software.

From the TriCaster control panel, a single operator switches between all of the available inputs and sources and then outputs the final program for air in 1080i HD. If desired, this entire playout operation can be automated.

Input sources to TriCaster include several Panasonic PTZ cameras—rolling on pedestals in front of the set—which are robotically controlled by presets from the TriCaster control panel. According to Adrian Bazan, NewTek’s regional manager for Mexico, Central America and the Caribbean, the news production team consists of a news journalist, producer, audio technician, and TriCaster operator.

Another source could be live network feeds—of national and international news, sports and weather—from Millenio—a major news network run by Multimedios, which has news bureaus in Mexico City, Guadalajara, and Monterrey, Mexico. 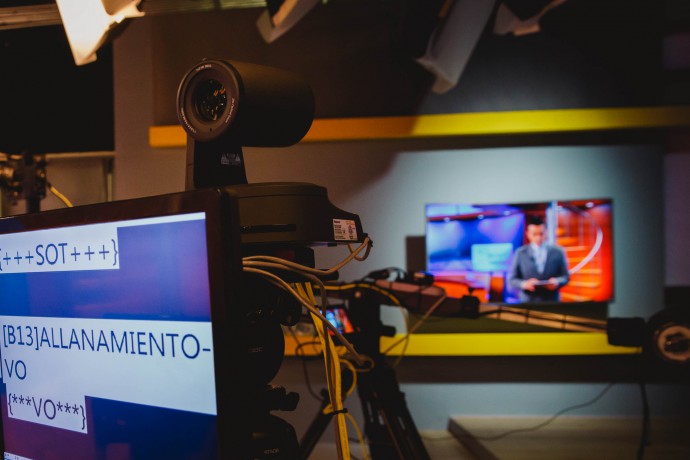 THE BUZZ ABOUT TALKSHOW

TalkShow, another product from NewTek, offers a low-cost, user-friendly way for Saltillo to bring in live reports and expert sources from the field, as well as interviews with people across Mexico and around the world. The TalkShow VS 100 allows Skype video calls to be presented live simultaneously.

Since TalkShow is an IP-based system that uses IP networks for connectivity, it eliminates the need for costly satellite feeds or travel. In fact, Grupo Multimedios is also one of the biggest customers of TalkShow, having purchased close to a dozen systems for use across its enterprise.

When people use Skype for real-time conversations, their video is optimized to correct for visual artifacts, aspect ratio squashing or other defects that can distract viewers. The system is also SDI-based, allowing the in-studio operator to control it directly using TriCaster.

TalkShow also supports both Network Device Interface (NDI) and Dante audio networking protocols. Saltillo journalists can use NDI networking as part of their newsroom workflow to share, and collaborate with, video content. For example, the TriCaster operator can switch to a live NDI-enabled source, provided it resides on the same IP network.

GROWING WITH THE FLOW

With the demonstrated cost-efficiency and success of its Saltillo news initiative, Grupo Multimedios is now considering deploying this ENPS/NewsCaster/TriCaster workflow to its other local stations. These stations, which are largely in northern and central Mexico, include Sabinas/Hidalgo, Leon, Nuevo Laredo, Ciudad Victoria, Matamoros, Tampico, and Torreon, among other cities.

“The other stations in our group are anxious to acquire this NewsCaster/TriCaster technology because they know it will make their lives easier,” Calderon said. “It’ll also improve their on-air product because they’re currently using an outmoded, manual video production methodology that limits the amount and technical quality of the live local news they can produce.”

“Budgets for conventional TV news are not going to grow anymore, while the demand for producing more news content for different distribution platforms and outlets will grow,” said Adrian Bazan.

“In light of these economic realities, news professionals will need to consider lower cost approaches, such as the one taken by Multimedios for a fraction the cost,” he added. “Multimedios is proving that their NewsCaster/TriCaster workflow enables them to create the high volume content they need, without sacrificing the high production standards their viewers expect.” 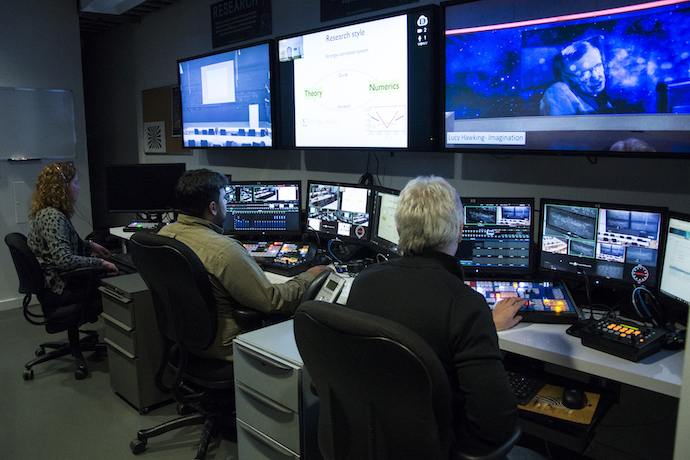 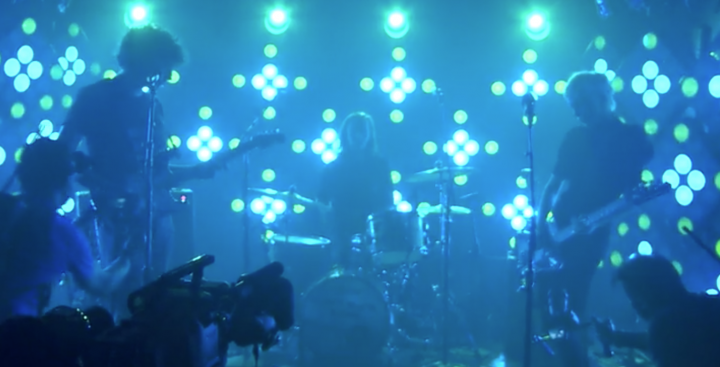