NDI Central Live—a webcast that streamed live from NewTek’s booth during the 2017 NAB Show—showcased interviews with executives of key NDI developer companies and end users, among other guests, while demonstrating the true power and reliability of NDI® (Network Device Interface) video over IP networking technology.

Produced and hosted by Rex Olson, NewTek’s Vice President of E-commerce Business Development, NDI Central Live was a complex media event that multi-streamed live from NewTek’s booth in the busy South Lower Hall of the Las Vegas Convention for the first three days of the 2017 NAB Show, which took place from April 24-27.

Considered the premiere entertainment technology showcase, NAB attracts media professionals from around the world who convene to witness the latest technology breakthroughs impacting broadcast and media content creation and distribution.

While NDI technology had been introduced at NAB last year, this year’s show featured an unprecedented use of NDI. Over 40 different exhibitors used this royalty-free, software-driven networking protocol as a robust, convenient and accessible way to access, transmit, receive, share and stream frame-accurate video as rich as 4K/UHD resolution in real-time over the Las Vegas Convention Center network.

NDI Central Live also benefitted from NDI by using it as the production infrastructure for this fresh, live programming, which streamed in its entirety to a global, online audience via Twitch.tv. Portions of the programming also simultaneously streamed live via NewTek’s Facebook page, complete with on the fly custom graphical branding. The Twitch feed was also picked up by NewBay Media and embedded in an NDI Central website they managed for NewTek as well as their partner site, Creative Planet Digital.

“NDI Central Live gave viewers the excitement of being on the show floor, hearing firsthand from key industry movers and shakers, such as NewTek visionary Tim Jenison, whose vision has impacted and revolutionized digital video production and distribution over two decades. The show also featured interviews with CEOs of NDI developers—such as VizRT, ChyronHego, and Adobe—whose companies now market products with inherent NDI connectivity and capabilities,” Olson said. These companies are now part of a global NDI community that now tops 400, whose products offer user-friendly interoperability enabling video over IP over standard Ethernet local area networks. 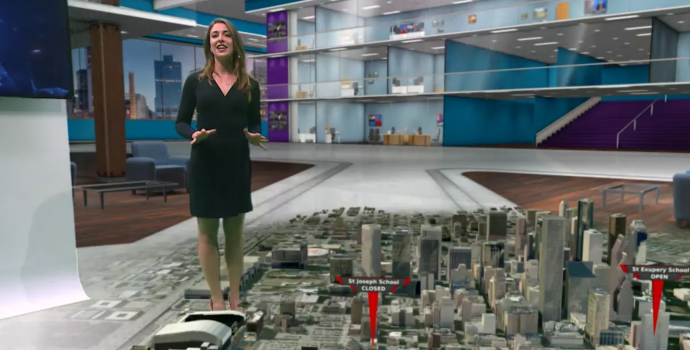 STREAMING FROM THE SHOW FLOOR

NAB attendees could watch NDI Central Live as it was being produced on a set to the left of the entrance to NewTek’s booth. The set featured a two-man desk where Olson interviewed each guest, behind which was a large-screen monitor that displayed video, stills, web pages, company and brand logos, and other digital content relevant to each interview segment. Another smaller monitor just to the right of the set displayed the line-up of guests coming on next and later in the day.

What show-goers didn’t know was that behind the NDI Central Live set wall, there was a small room that NewTek booth staffers referred to as the submarine. Inside this small enclosure, Technical Director Brett Beanan was operating the control panels for various NDI-capable NewTek production systems, including the NewTek VMC1 Video Mix Engine, MediaDS, TalkShow, and TriCaster 460. Audio from wireless microphones worn by the NDI Central Live presenters traveled to the wireless receiver that fed the audio mixer to the NewTek VMC1 mix engine where it was converted to NDI.

From a chair that he rarely left, Beanan served as a one-man band who used these NewTek systems to produce the 1080/60p HD video for NDI Central Live’s multiple live streams, all while routing the multiple video streams feeding the monitor walls around NewTek’s booth as well as the on-set monitor out front via NDI.

“I didn’t have a production crew or a million-dollar equipment suite. It was just me, doing the work of six to 10 people, with about $50,000 worth of gear,” said Beanan. “This productivity is due in large part to the power and cost-efficiency of NDI networking.”

At one point during *NDI Central Live *production, Beanan wanted to pull in live video of a media session, called Broadcast Minds, that was taking place on the second floor of the South Hall. He phoned the video operator in the meeting room and asked if he would put their live HD video signal onto the NDI network. Since they were both connected to the convention center’s in-house network, he was able to select the live video feed coming from the session as an in/out in his VMC1.

In advance of production, Olson asked guests that appeared on NDI Central Live to provide any media elements they wanted to have featured during their interview segments—such as video clips, company and product logos, and website screens—so that the assets could be organized into media bins on Beanan’s production control interface. Yet a few guests still arrived with some new, unplanned media assets they wanted to use from their laptops. By loading an NDI app onto the laptop, which instantly connected the laptop to the NDI network, Beanan was able to quickly pull whatever elements he needed into his production switcher and incorporate them into the live show.

Since the show was comprised of 30-minute interview segments, every 30 minutes Beanan needed to roll the program open. The graphical open involved repositioning the three pan/tilt/zoom robotic cameras, opening the talents’ wireless mics, mixing the sound, flying in the graphics, bring up lower third supers, and more.

“Rather than rolling these rapid-fire events manually, I was able to have the entire sequence fire automatically at the push a button on the media playlist because I had written macros to take care of it before the show started,” Beanan said. “Once I had the booth all set up and the macros dialed in, it was one button push to start the show and one more to roll the program close, including the custom branded program versions we delivered to Twitch and Facebook Live from MediaDS. I didn’t have to do anything until it was time to start switching the cameras.”

The show also featured ticker graphics at the bottom of the screen and Twitter posts and news headlines that scrolled in a right-side banner on the viewers’ screens supplied by Bannister Lake’s Chameleon graphics system. NewTek staffers at the company’s San Antonio, Texas headquarters read and aggregated the Twitter and news posts and sent selects through the cloud for conversion to NDI to use in the show.

While the NewTek TalkShow unit played a big part in this segment, Beanan also used NDI to route one of their camera signals as it was coming into his IP Series VMC1 Video Mix Engine over NDI to the TalkShow so the player in the Microsoft booth could see what was going on.

Beanan was also able to take the XLR feed from his intercom system into the VMC1, which converted it to NDI, and then fed that intercom audio into TalkShow. Using the talkback button on the TalkShow control surface, he could open his intercom mic and speak discreetly off-line with the contestant in the Microsoft booth to say they’d be going live in 5, 4, 3, 2, 1… Then, he’d cut off his own mic and the shot would be live.

NDI Central Live was able to manage a wealth of media resources—both locally and from remote exhibits around the convention center—efficiently via a single NDI LAN. And exhibitors that were logged into the private NDI network were able to instantly share any video they were generating or displaying in their booths with each other.

According to Beanan, “This was the first time in the history of NAB—maybe the world—that this number of trade show exhibitors were all interconnected and able to pass video signals back and forth the way we were doing.”

Olson added, “I’ve always enjoyed being able to use our own technology to show others what you can do with it. Now with NDI, we’re not only able to simplify a production but also connect to live video from anywhere in the convention center using the in-house network. This is something that just wasn’t feasible before NDI.” 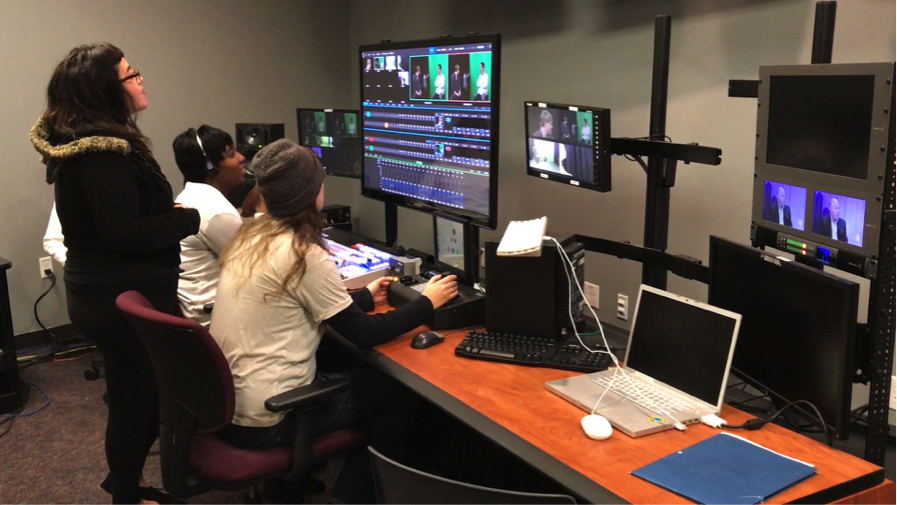 Preparing Students For A Career in Real-World Live Video Production