Friday is the traditional day of congregational worship for Muslims, when millions come together in their local mosques for prayer.

But on the other six days of the week, the world outside the mosque hears messages that paint a negative picture of the Islamic religion – messages that are drowning out the intended positive messages practiced by the overwhelming majority of devotees.

The committee leading the Jamia Mosque in Kenya, a country more than 4 million Muslims call home, determined that the time had come to show the world the positive side of the religion and its people and present an even stronger voice to followers and non-followers alike.

Jamia Mosque in Nairobi, characterized as “the headquarters of all the mosques in the country, with more than a thousand other mosques all looking upon this one,” saw a clear opportunity to get its word out through media.

“There are misconceptions of how people relate to Muslims, so we wanted to have our own narrative,” says Ali Mwachuo, general manager and head of Production at the mosque. “The country of Kenya didn’t have a TV station for Muslims competing favorably in the mainstream media. Jamia Mosque Committee Nairobi decided we’d be the first.”

Producing just a television program would not be enough; nor even a TV series: the Jamia Mosque would build a professional Muslim television station, Horizon Television, and supply it with programs that would be distributed via the country’s free TV.

Says Mr. Mwachuo, “The biggest challenge that we faced upon having the idea of starting a TV station here at the mosque was all about content. How would we even create programs?”

It was a valid question. The organization didn’t have a studio. It didn’t own any equipment. It lacked an experienced production crew. It needed to start from scratch.

Furthermore, since its ambition was based on setting up as a fully-fledged television station, it needed to abide by the Communication Authority of Kenya’s guidelines of ensuring 40% of its daily schedule was local programming.

What the mosque did have in its favor, however, were usable space on its premises, access to local college media program graduates and workers from other TV stations in Nairobi, and the willingness to invest in quality content creation.

So the committee set out to find a video production solution that could outfit an entire on-premises studio, and enable less-experienced production talent to deliver a full roster of professional quality programming every day.

Maula Sefu, Technical Support Engineer with video production specialists (and NewTek Elite reseller) Highway Audio Visual, is based in Nairobi and made contact with the Jamia Mosque. After hearing what they wanted to accomplish, his immediate recommendation was a NewTek TriCaster – an all-in-one multi camera production system that incorporates all the capabilities required to equip a full production control room, presented through a software interface that would allow an individual operator to produce a complete show.

Sefu wanted to arrange a studio visit for the project leaders to see a system in action, configured with all the latest capabilities. However, he says, “There were no other TriCasters in Kenya installed with Advanced Edition” – the optional add-on software that augments basic TriCaster systems with dozens of additional functions.

But he had something none of the other vendors had: an ultra-portable, all-in-one production system he could take with him – the TriCaster Mini – and deliver a live demonstration in their own offices, with their own video sources.

An added bonus: since TriCaster systems are software-based with a unified interface and capabilities equivalent across all models, demoing with the Mini would be nearly identical, functionality-wise, to any other TriCaster model.

According to Mr. Sefu, “While other video production suppliers had to present their proposals and explain their workflows on paper, I was able to show in real-time exactly how a Horizon Television production would work, no matter which TriCaster system they purchased.”

Says Mr. Mwachuo, “The two most important things for us were, first, to develop the professional level of programming that people would want to watch, and, second, we could only succeed with good production quality; and also to create more programs for people to see, and we could do that by saving time.”

The only resolution the group saw was to avoid post-production and produce their shows in real-time.

“Post-production takes a long time,” says Mwachuo. Between shooting multiple angles of a scene, going into an edit suite and ingesting them into an editor, then cutting the shots together and finishing with titles and graphics, traditional television post would prohibit them from fulfilling their daily programming needs.

“The only way we saw to reduce it was to take less time during the actual production. So the solution was using a TriCaster,” he says.

They selected four, in fact: two for in-studio – a TriCaster 8000 and a TriCaster 410 – and two TriCaster Minis for field production.

“It’s simply the fact that in the field, we can have a multi-cam production, which most of our programs entail. Shooting and capturing multi-cam in real-time reduces the time we spend back in the editing suite, which takes hours.”

Now, says Mwachuo, with both TriCaster Mini field kits configured to switch four JVC HM 200 cameras, “the only thing that we spend time on is conceptualizing the graphics once we’re in post, and then we insert them in the TriCaster. Immediately when we call it a wrap, when we are done with the production, we already have our program at hand. It really helps us complete more programs.”

In the studio itself are a TriCaster 8000 and a TriCaster 410. According to Sefu, both systems are in a single control room which serves as a combined production control and master control room.

Altogether, on the air since March 2017, the station is now producing five television programs each day – already achieving 35% of the 40% local programming guidelines for state television.

But one day a week, the pace in the studio transforms from fast-turnaround production to live streaming television.

Every Friday afternoon, thousands of people attend prayers in the mosque, with numbers occasionally swelling to 10,000 including worshipers coming from various parts of the city and nearby towns.

To reach everyone else – people who can’t attend, those from farther distances, and the general public curious to learn about Islamic traditions – the studio produces a live program from the mosque and streams it to its Ustream and Facebook accounts.

Says Mwachuo, “We thought that the Friday prayers would be primarily for Muslims to watch, those who are at home. But streaming it on Facebook and Ustream means it’s available to everyone in Kenya, and every house in Tanzania and other places. On the first day we had about 10,000 views on our Facebook page, which was only about four weeks old, and after that, on every Friday now, it still comes to an average of 2,000 views.”

In addition to being a dedicated television station for Muslims in Kenya, there’s something else that differentiates Jamia Mosque’s television production.

“None of the people had operated a TriCaster system before, and some have never done production before. Now, they’re able to work in a control room,” according to Highway Audio Visual’s Sefu.

He helped train everyone to produce multi-camera and live video with TriCaster – recent graduates from the university media program, professionals who had previously used traditional analog systems at local stations and others who had no video experience at all.

One of the novices, Fauzia Murono, fresh out of university, thought she’d be embarking on her career as a sound person.

What’s more, the TriCasters in the control room are linked over the network to the two Minis when they’re back from on-location production, so she can pull pre-produced packages from those systems.

Each TriCaster is connected to a 1Gbps Ethernet network using NDI®, NewTek’s Network Digital Interface for encoding video over IP and communicating bi-directionally between systems, enabling any of them to see and use the others as video sources.

Their editing workstations have become TriCaster sources as well, with the NDI for Adobe CC plug-in enabling them to pull footage and clips into TriCaster directly from Adobe Premiere and After Effects.

And during the live production of Friday prayers, she says, “I do this all myself.”

Fridays are the most hectic, says Ms. Murono, but TriCaster makes production seem to flow and simplifies the entire process, compared to traditional systems.

“TriCaster makes your job easier. You have this one person doing everything from the mixing, to controlling, and then transmitting. With all in one, you avoid the crowding, and it is not as hectic.”

The Jamia Mosque is on its way to achieving its mission of growing the positive message for Muslims, with its professional quality productions and its increasing volume of programming.

“In one sense, the response has surprised me,” says Ali Mwachuo. “But we really feel that we are on the same level and competing with stations that have been broadcasting for years, the mainstream stations that we have here in Kenya.

We wanted to be the best Islamic TV station actually in the region. As of now, we are moving closer to that.” 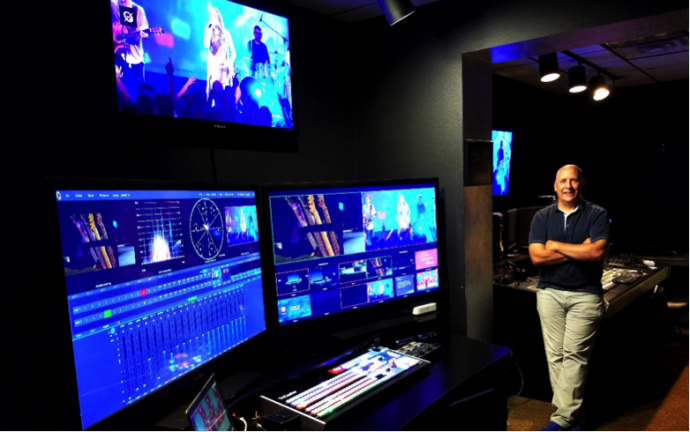