Digital P Media produces live video coverage of Fishing League Worldwide (FLW) fishing tournaments. Live video streams from iPhones and JVC/Zixi cameras on the water at a tournament are decoded at the central studio in FLW Operations Headquarters in Benton KY, where the show is directed and switched live on a TriCaster®.

The 2019 fishing season began January 10th, and Digital P Media was prepared to take their productions to the next level with a new TriCaster TC1 and not one but two 3Play® 3P1 replay systems. The TC1 replaced a TriCaster 860. Digital P Media founder Peyote Perryman recently shared the technical and business benefits of his recent NewTek upgrades.

“The biggest reason to switch to the TC1 was to have more computing power for our show. We are using a lot of NDI signals and the TC1 has better network resource management built into it,” Perryman began.

Network resource management is important to Perryman because of the number of simultaneous streams being decoded for isolated camera recording and live on air switching. “We’re using the JVC HM890 camera to a bonded cellular JVC PB200 which is like a mobile hotspot. From there the camera signal is transmitted via Zixi, a cloud-based streaming service, to the studio in Kentucky,” he said.

Until the TC1 upgrade, Perryman used external vMix systems to translate the incoming streams into NDI® live video and isolated camera (ISO) recording. “When the backhaul signal would drop in the vMix systems, we would have to reset the input and that would reset inputs on the TriCaster,” Perryman said. “Connect Pro senses the incoming signal and brings it back automatically. But honestly, it seems to hold the signal better because we aren’t seeing as many dropped signals so far this season.”

The TC1 supports up to 16 video sources, any combination of SDI and NDI IP sources adding up to 16. NewTek Connect Pro is a software application that runs on a Windows PC and serves video across the LAN. Connect Pro supports up to 4 channels, each switchable between input or output. It provides frame-rate and resolution cross conversion, frame sync and audio re-clocking on all inputs with adjustable per-channel A/V sync.

Connect Pro supports a variety of video over IP sources, including RTMP, RTSP, and HTTP streams, and some IP PTZ cameras from JVC, Panasonic, PTZ Optics, Sony, Vaddio and NewTek. The Webserver feature enables remote viewing of NDI sources from a web browser on any networked device, including iOS and Androids.

Digital P owns two Connect Pro computers. With Connect Pro, “We were able to focus on making a show and less time chasing the signals down.”

Many of the technical and creative challenges for the FLW productions were solved by Technical Director Marshall Alderman. He spent a week over Christmas rebuilding the show from the ground up while devising new TC1 workflows for the January deadline.

Instead of waiting for fish to bite, Perryman uses replays to build and maintain an exciting show pace.  “Most people think it’ll be slow watching people fish. The 3Play 3P1 makes the content engaging. People see game changing replays that happened moments ago, mixed in with live action.”

There are plenty of potential ISO action sources to monitor and choose from. “We have action from 6 cameras plus a live drone out on the water. We have two 3Play 3P1s, and each gives us 4 continuous ISO records to make sure that any action that is happening on the lake is brought to the viewer within minutes of it happening,” he said. The live-stream fishing action moves so fast, Perryman reports that “viewers are freaking out and asking – How did they know?”

YouTube gets a special feed without commercials, instead inserting a “Commercial break in progress” graphic. This year’s commercial insert graphic is ‘Live look sponsored by Polaris.’ “We use vMix for this part of the show,” he said.

Sponsored replays make money without commercials. “We created a sponsored logo wipe for our “Ranger Replay” and utilize that throughout the show,” Perryman said. “By finding ways to incorporate our sponsors into the show, we can stay on the water for extended time between commercial breaks and that has led to a better user experience which creates better engagement numbers.”

Renaming Quad Screen M/Es by fisherman’s names makes shows easier to direct. Perryman does it “By naming the input on the TC1 with the name of the angler and using that source name in the graphic overlay. The nice thing is we can change it on the fly. We have 6 cameras and we change up the quad screen all the time. It was important to come up with a way to keep the graphics following the onscreen M/E.”

“Viewers love our ability to feature multiple anglers and info and we have two M/Es that we rely on, the ‘Angler Split’ and the ‘Quadscreen’,” he said. Perryman uses Macros in his M/Es. “The one we use the most is called ‘angler split.’ It’s pulling in 2 sources and a lot of info via datalink into a clean split screen. We can put maps in the right box or sometimes we put stats on the angler being featured.”

Right now, the hosts watch a program feed split from the TriCaster Multiview output. “NDI is providing our talent with the ability to see more than the multiviewer or program feed. The smart solution is through NDI monitors on laptops. With a NDI monitor on their laptop, hosts can peek in on other anglers when they want. One thing about our show is that the hosts aren’t on camera very often. We spend most of the show on the water following the competition.”

Many traditional TV producers want to duck and run to info graphics until someone catches a fish. Most TV directors don’t know fishing,” Perryman said. “I’ve developed a sense. I’ve gone to more guys right before they caught a fish because I’m watching how they fish.”

“A couple years ago before the 3Play,” he continued, “I couldn’t leave a fisherman because I couldn’t get the replay because it was bad. I couldn’t play it, would lose it, and had to move on. With the new gear, I’m no longer worried about that. I can switch more confidently with the upgraded equipment and personnel. Our recent NewTek upgrades help me tell the story without having to troubleshoot signal flows.” 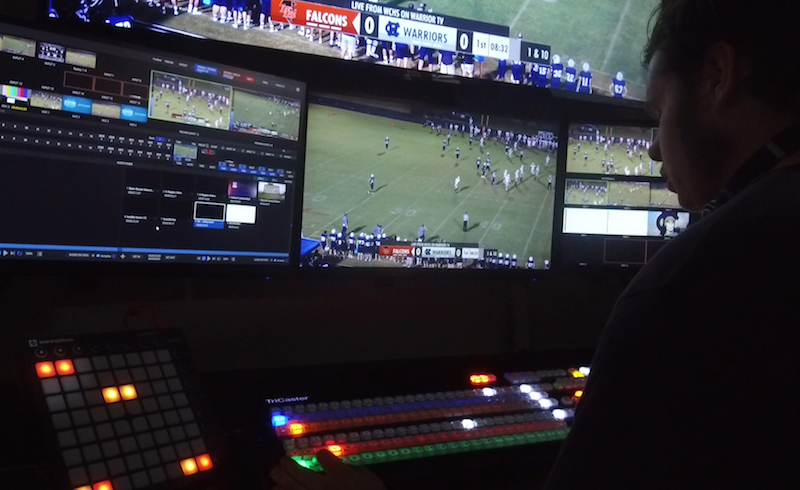