Last winter, an experiential marketing campaign highlighting summer sun and sandy shores arrived at some of the chilliest – yet busiest – locations in the United States: international airports. Airports in Boston, Washington D.C., Chicago, and Cleveland each introduced unique and limited-time digital signage that provided a live look into the shores of Copacabana Beach in Rio de Janeiro. Further, the staff of the Hilton Rio de Janeiro Copacabana Hotel – from the concierge to the chef – showed off their resort and asked the winter-weather travelers to consider getting a Brazilian visa and coming down to visit.

The temporary set-up – which featured a 360-degree projector on a partially constructed geodesic dome – was the creation of Hilton Hotels and JupiterReturn, a digital creative agency based out of both Los Angeles and Rio De Janeiro. The team at JupiterReturn was asked by the Hilton Rio de Janeiro Copacabana Hotel to come up with a way to show busy U.S. travelers the summer shores they were missing out on, and to entice them to apply for passports and a visa right there in the airport.

When we were first approached by the group with Hilton Hotels, they said they wanted a single camera broadcast of one individual talking about the location,” said Victor Borachuk, Director/Executive Producer at JupiterReturn. “A lot of that was driven by a reasonable budget and a traditional understanding of what can be done under that budget. I think there are a lot of companies that would just accept that and run with it. What we did was offer a far more robust program at nearly the same cost thanks to some major shifts in the way you can control live video.”

The production was able to set up live point-of-view cameras at a number of locations across the hotel. This highlighted locations such as the beach, the pool, and the main lobby. In addition to the camera feeds, NewTek TalkShow, the Skype TX software built-in to the TriCaster® TC1 was used for real-time chat from the host at the airport to the host in Rio de Janeiro.

A director was then able to easily switch to those views as people spoke about the amenities within. Further, they were able to run features looking at the cultural tourism, the nightlife, the local cuisine and other highlights on demand as the production took place. In all, the digital production was up live for eight-hours at a time.

“It became a much more comprehensive concept than they originally planned,” Borachuk said. “We were able to seamlessly switch between shots using a single NewTek TriCaster TC1 and NDI®-enabled cameras throughout the hotel. It was all run through the hotel’s network – no need to run cabling throughout the facility.”NDI is the royalty-free network protocol that allows for a complete, end-to-end IP video workflow. NDI is designed to work on the existing networks of facilities – in this case, the hotel’s local network – and bring in video sources from nearly any source.At the hotel, Borachuk used Sony FS7 cameras connected to NewTek Spark devices, which switch the signal from the camera into an NDI feed.

The beauty of that is that it isn’t a massive spend,” Borachuk said. “With NDI you don’t need to run a ton of cabling and you don’t need a huge staff. You can set up your positions and then control it directly from the switcher. It really frees you up to be creative with something like signage – you’re actually providing a live stream to the location where you want to advertise. That’s really an incredible sales pitch to people who would love to be traveling somewhere warmer than where they are right now.”

For the production, JupiterReturn’s workflow included: 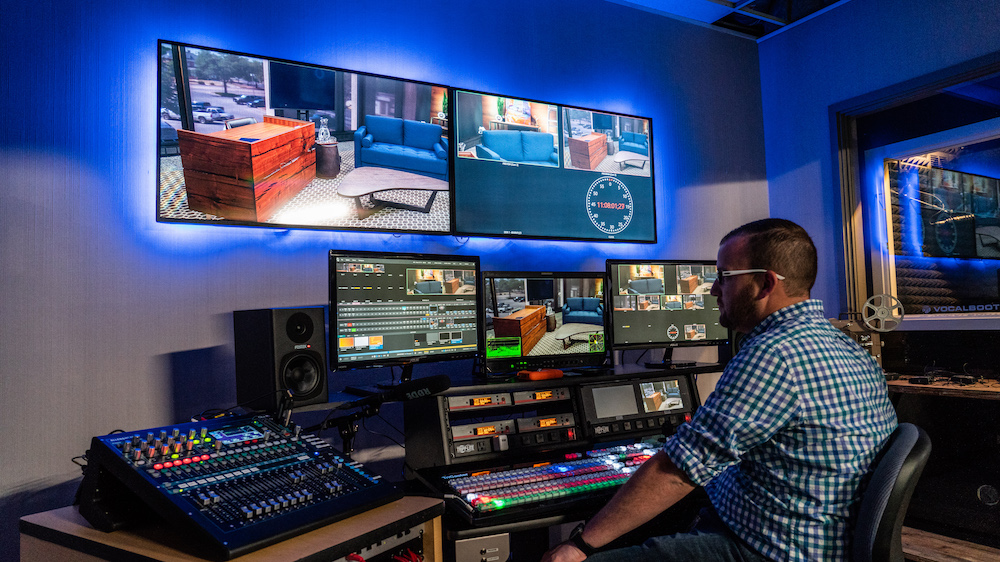