Live Stream Delivery With MediaDS™ - Beyond The Classroom

With 22 elementary schools, six middle schools, and four comprehensive high schools, the Placentia-Yorba Linda Unified School District (PYLUSD) headquartered in Placentia, California, has found that streaming live video to multiple distribution platforms provides a great opportunity to allow the family and friends of their 26,000 students to share in the experience of their loved one’s special school events.

Whether it’s a band concert, choir performance, school play, graduation or other momentous occasion, people can and do tune in to watch PYLUSD’s live or on-demand media streams from literally around in the world.

While PYLUSD isn’t new to online streaming, the process is now easier, more flexible and less costly due to the new NewTek MediaDS™ multi-channel encoding/streaming system they acquired last spring. They immediately recognized the value of MediaDS because it gives them a wide range of intuitive features and tools to fully control their real-time video encoding and multi-platform distribution.

Before MediaDS, PYLUSD used to use a single-purpose encoder, designed to stream content to one particular CDN. But, Gary Farrell, the Theaters and Facilities Supervisor for the PYLUSD, found that with this type of encoder, they were often being asked to pay a monthly subscription fee in order to stream to an additional platform. Or, he would have to buy separate single-purpose encoders, one for each platform he wanted to reach. He was surprised to learn that this was not the case with MediaDS.

“We consider MediaDS to be a tremendous value because we do not have to have separate single-purpose encoders, or pay any monthly subscription fees to stream to more than one platform,” Farrell said. “MediaDS puts the functionality of four independent encoding channels into one integrated streaming device.”

MediaDS fuses real-time encoding from NewTek and CDN streaming from Wowza to create a single, affordable, turnkey box with a user-friendly interface to manage every aspect of the streaming media workflow.

Let’s say that El Dorado High School—one of PYLUSD’s four high schools—is having its graduation tonight at 7:00 p.m. Pacific Time. According to Farrell, “Some people want to tune in early, maybe at 6:45 p.m., so they can soak in the whole event from the time the audience takes their seats to the conclusion at 9:00 p.m. For this audience, we stream the entire live event without interruption on our website.”

But, Farrell explained, “We also stream the graduation simultaneously on Facebook Live and send out notifications to our followers that ‘we’re now live on Facebook.’ If Facebook users click on that link and only see a bunch of empty chairs and people milling around, they don’t have a high tolerance for downtime. Even if it’s just for a few minutes until the start of the event, we find we lose viewers very quickly.”

As a multi-channel encoder and streaming device built into one solution, MediaDS lets the PYLUSD production team use one of its four channels to stream the entire event to its website, or to a custom Wowza webpage created just for that event.

“We can then use a second MediaDS encoding channel to toggle in and out of the event at high-value time periods—like the speeches and awards—to Facebook Live so when those viewers join the stream, the event is in full swing,” Farrell added. “By going live with short bursts of engaging content on Facebook, we tend to reach a very high viewership.”

PYLUSD also uses other social platforms, such as Vimeo and YouTube Live, in a variety of ways. But in other cases, where students are using Google Apps for Education, Farrell has found that YouTube Live is a great platform for streaming and sharing that content.

The MediaDS includes tools for creating a Wowza “event page,” or webpage just for a particular occasion or purpose. It’s also possible to embed the media player right into a web page. And by adjusting the adaptive bitrate of the streams, it’s possible to control the quality of the video playback that viewers see on their phones, tablets, desktops, or other connected devices. With the system’s integrated Wowza analytics, PYLUSD can also get a detailed report on the viewership for any media they streamed.

“Live streams of our student’s events have been watched by family members in over 20 different countries around the world,” Farrell said. “This streaming capability is valuable to our community because it allows family members who live or work outside of the district to share in special moments that they would otherwise have missed.”

Since it was installed in April 2017, the MediaDS at PYLUSD has proven to be rock solid, with the reliability of a dedicated hardware device. And it offers the same high-caliber graphical user interface (GUI) and advanced video and audio processing tools that NewTek is known for.

It is also advantageous that MediaDS allows four SDI-baseband signals to be plugged into the back of the unit, or four NDI signals coming into the Ethernet port. More importantly, this can be a mix of SDI and NDI sources. Farrell says that their facilities are gradually migrating from SDI to NDI, and in fact, he plans to buy a new TriCaster® TC1 NDI-ready switcher in the near future. The district also has a NewTek TalkShow VS4000, which is NDI-ready.

PYLUSD’s facilities include a Performing Arts Center, a new $18 million theater that any of the district schools can use. As part of its community outreach, local organizations and churches use this space on a regular basis for a wide variety of events, as well as its video encoding and streaming capabilities. The Performing Arts Center has a large auditorium—with HD cameras and a theatrical lighting grid—where plays, concerts, and other performances are staged. Next to the auditorium is a video production control room that’s currently equipped with a Blackmagic 1ME 4K Atem switcher, with a 40x40 Smart Videohub, scan converters, recorders, and more. The TriCaster TC1 2ME switcher will replace much of this equipment, and with its NDI capabilities, Farrell says it will enhance their control room. He has also incorporated Dante audio over IP networking into his Yamaha audio mixer, and plans to expand the use of Dante throughout their video production infrastructure. “While we’re transitioning to NDI and expanding our use of Dante, the most important thing to me is that we’re now in a position to get the right content out to the right CDN,” said Farrell. “MediaDS gives us the broadest toolset and the greatest flexibility to get our content out to any of our preferred CDN platforms. 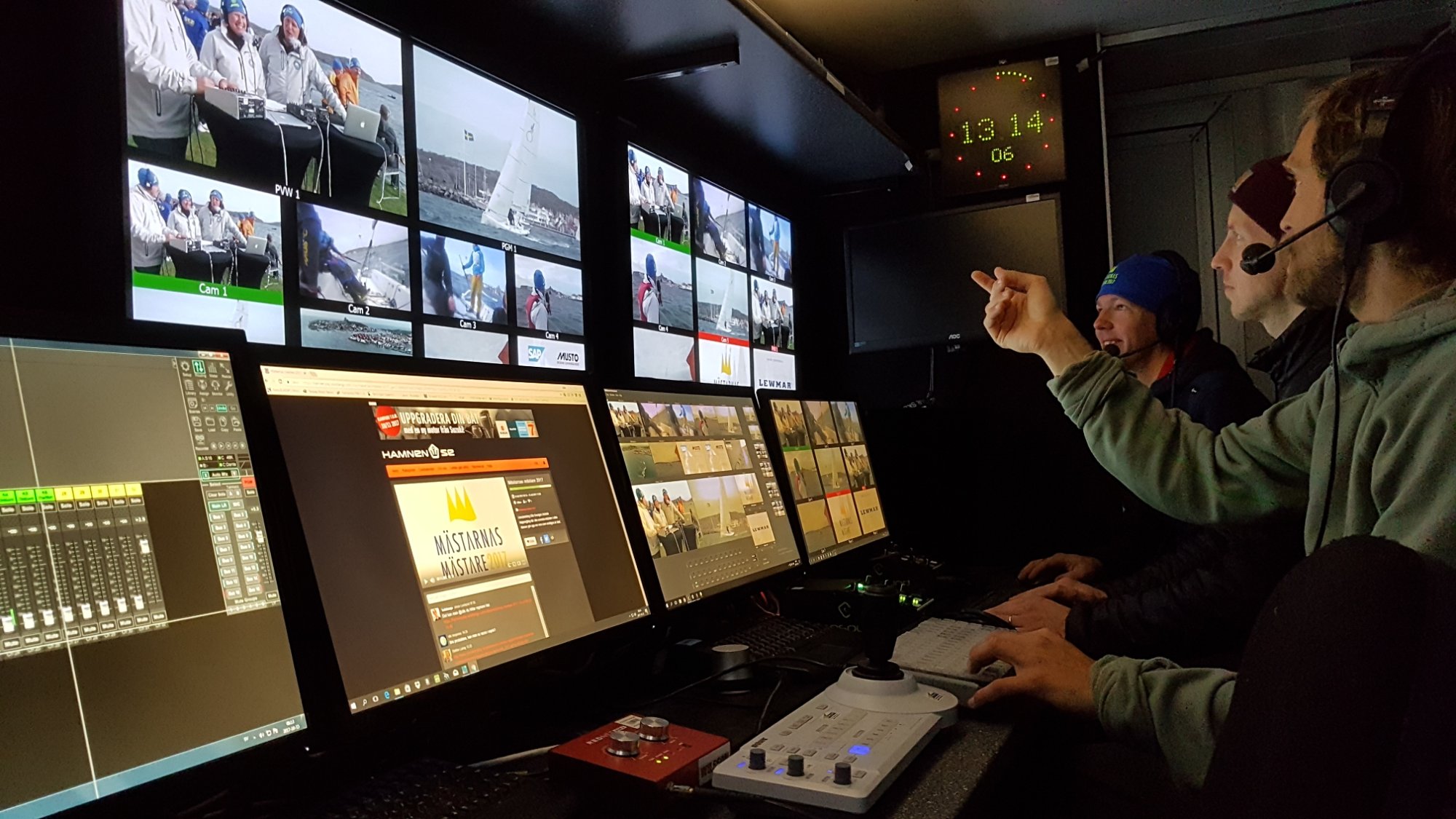