“Whatever equipment our students use—whatever facilities we put in place—we always make sure we’re meeting one expectation: that students will get the best possible experience they can get for the jobs they want when they graduate.”

That’s according to Christopher Leese, Technical Specialist for the Media & Communications department at Staffordshire University.

It’s not an uncommon mission statement for anyone in higher education. But what’s not so common is that the jobs Mr. Leese is referring to are in an industry that didn’t even exist just a few years ago.

So when it came time for the University to build a new facility to prepare students for their future careers, he and his colleagues had to put aside equipment that had worked for decades in the past.

Instead, they focused all their attention on future-looking technology—technology that didn’t even exist, just a few years ago.

Ahead of the Game

Take one look at the course curriculum for the newest addition to Staffordshire University’s business school, and you’ll see it’s not like any other management programme in academia.

That’s because the University’s brand-new course—started only in September of 2018—is anything but typical.

In fact, it’s the first of its kind in the United Kingdom, focusing strictly on the business of an emerging industry that in 2019 expects to see record revenues, thanks in large part to the influx of companies and investors getting into the market.

With a growing sector and high-profile brands rushing into a new space, Staffordshire University looked into the future of its graduates, and saw an opportunity for them to be on the leading edge of a USD $1.1bn (£844 million) industry.

And the Bachelor of Arts in Esports (Honours) was born.

Staffordshire University, located in Stoke-on-Trent, England, is no noob when it comes to teaching technology.

For one thing, the campus’s roots date back more than a hundred years, to the site of a school of science and technology that opened in 1914.

Other experience points: the University’s computer science programmes include certifications in Cyber Security, studies in Artificial Intelligence and Robotics, and partnerships with Cisco, Amazon, and Microsoft.

What’s more, it offers no fewer than four bachelors’ degree programmes in video games. It has previously been ranked best business school in the world for its use of Twitter. And it pioneered the world’s first Games PR and Community Management degree.

It was just a natural levelling-up for Staffordshire University to become the first in the UK to offer a degree programme dedicated to the business of esports management.

In 2017, at the time of the course’s conception, the Business School’s Associate Dean for Recruitment, Rachel Gowers, observed that industry was driving the creation of new jobs, saying that “companies are looking for people who are both entrepreneurial and tech savvy.”

That’s because jobs in esports aren’t limited to the players sitting in front of the game consoles. For companies to make money in esports, just like any other sport, it takes more than just athletes—it takes a whole ecosystem of specialisations.

These jobs can be anything from highly visible roles like on-camera shout casters and hosts, coaches and analysts, to behind-the scenes pros including event managers, partnership and sponsorship reps, production crews, team or organisation managers, finance specialists, and PR execs.

With its combination of business and technology expertise, the University was well-positioned to pioneer a programme that could both advance the career development of the next generation of students, and have a direct impact on the industry’s presence and growth in the UK.

Additionally, one of the school’s Lecturers, Stuart Kosters, said that to give students the best chance of getting a job, course developers had actually worked closely with industry employers, for whom hands-on experience was vital in their recruitment.

What better selling point to drive the hands-on experience home to prospective students than to create an Esports Hub—a state-of-the-art facility where they could bring their own esports competitions and productions to life?

The course developers turned to the technical specialists in the Media & Communications staff to specify and deploy the equipment and infrastructure for the new facility. The tech staff were already responsible for running, supporting and maintaining the gear used in the school’s other production studios.

“The newsroom that we have here is a four-camera studio in a typical ‘newsy’ setup with green screen and lighting,” says Chris Leese. Students in the school’s television studies or sports journalism programmes, for example, produce live news shows and special broadcasts, and report from the football grounds, all using mostly conventional broadcast equipment. But Chris knew it wouldn’t be the same for esports.

The Esports Hub would require 4K streaming, as well as vision mixing large numbers of simultaneous, high-res computer sources over the network (think a dozen gamers competing in the same game) together with 4K camera sources, graphics and audio.

What’s more, Chris says, “because this was a new venture for us, it had to be something that was going to be flexible, something we could expand on if we had to make changes at any point.”

It was clear right away that investing in traditional broadcast equipment was not going to be sufficient. “We had to look into future capabilities, or we’d be fitting out a studio that was going to be outdated almost immediately,” says Chris. “We had to go IP.”

Designing a brand new, 4K-ready, all-IP space from scratch for the first esports business degree in the country seems like a fairly daunting task, considering it had never been done before.

But what made it even more challenging—and exciting, says Chris—is that he and his technology staff colleague, Matt Lewis, hadn’t actually built a production studio before. “The TV studio had already been installed before we started our current roles,” says Chris, “and before that, we didn’t have any broadcast engineering experience or a background in outfitting a studio. We’ve just developed that knowledge and understanding over time.”

But the staff has a rule of thumb it uses whenever they’re deciding on any new equipment that comes in. “Be it portable cameras, an audio controller, or anything else that’s going to ultimately get installed, the first requirement is that it’s got to be what we call ‘student friendly.’”

That ‘rule’ has helped them make equipment choices that allow students to grasp production concepts and create their projects a lot more quickly.

“We’re not training students to be broadcast engineers, so we don’t need to delve into in-depth lessons about how signals are routed or how equipment is cabled,” Chris says. “It’s got to be something that they can easily pick up. And that was one of the biggest selling points for going to NewTek.”

This allows productions to be configured for two teams of 6 players, plus a connected “spectator mode” workstation to determine which in-game feeds will be used. Game consoles such as Nintendo Switch or PlayStation can be added to the network via NewTek Spark Pro, converting HDMI video devices to NDI sources.

Vision mixing for all gaming PCs and consoles (plus graphics and audio) is centralised in the 44-input NewTek VMC1, which, with its companion 2-stripe Control Panel, is “student friendly” enough to be operated without ongoing staff support.

In addition to the networked inputs from the computerized sources, the facility has 3 studio cameras as well as a ceiling-mounted PTZ camera, all with 4K signals converted to SDI using converters, and then brought into the VMC1 via a pair of NewTek NC1 I/O modules so that they’re available for mixing and monitoring over IP as well. (Only the VMC1 has a 10Gb network connection.)

A dedicated switch isolates the esports hub from the University’s administrative network, keeping additional traffic from bogging it down. All in all, says Chris, the project involved far more IT connectivity and networking than he and his teammates had implemented before.

“Doing this project really pushed our knowledge forward massively in terms of broadcast technologies and also networking,” he says. “We didn’t have years of extensive knowledge beforehand, but the technology available made us fairly comfortable with going into it and doing it ourselves.”

With traditional workflows, most facilities of a similar scope would require consulting with broadcast engineers and specialists, he says. “It just speaks volumes about how easy it is to use NDI.”

September 2018 marked the opening of the programme, which, predictably, filled to capacity when it launched. “Within months of the students using the hub,” Chris says, “we were already expanding on and developing different elements to incorporate into it.”

For example, the school hosted a recent broadcast event, showing the esports varsity (or eVarsity) team playing against another local university.

“With traditional setups we wouldn’t have been able to do that. We just wouldn’t have had the cabling in place to send over the signal, and streaming it would have added a massive delay,” he says. “So NDI has already allowed us to expand and achieve new capabilities that we’d never have done with a broadcast studio.”

He mentions another event coming up that will be completely driven by the students, who are now scheduling their own independent events. Because it will take place over the weekend, they won’t have any technical support from staff.

But they’re already self-sufficient, says Chris. “They’ve got equipment they like to use, they’ve got the training, they’ve asked us any questions that they might to know. Now they can effectively do the whole production on their own.” 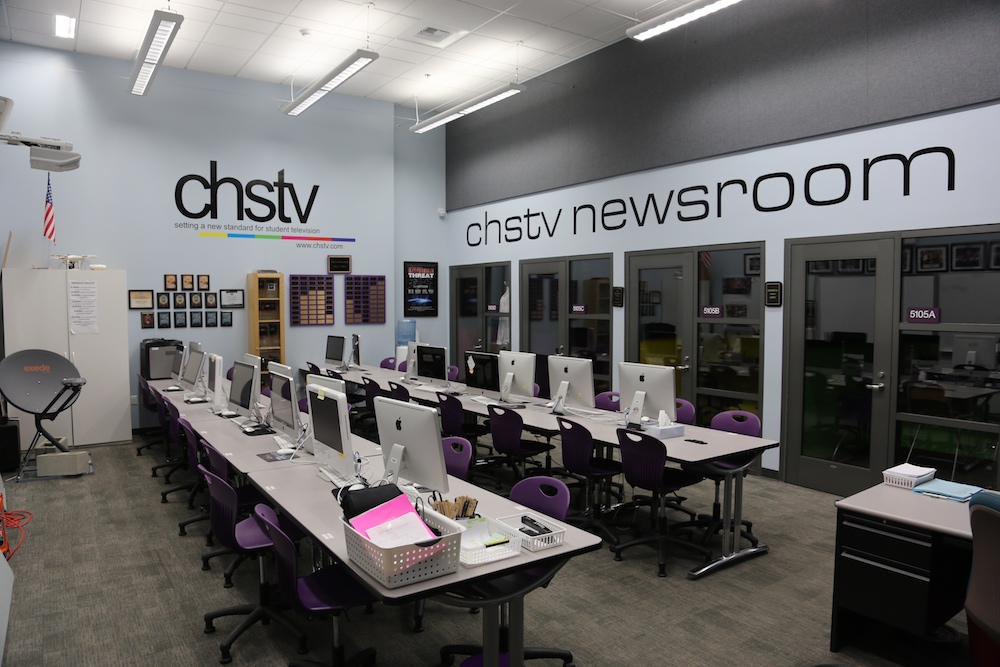